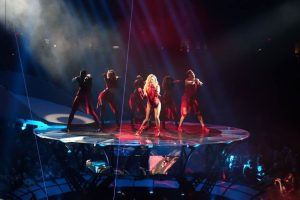 “Don’t stare, but don’t walk away.” Stefani Germanotta, better known as Lady Gaga, preached to her crowd Sunday night at Banker’s Life Fieldhouse in Indianapolis, Indiana, in hopes of spreading awareness about mental and physical illness.

Well, Lady Gaga, no one walked away but everyone stared. How could you not? Were we at a concert? A fashion show? The theatre? Whatever you want to call the show last night, it was captivating. No one was getting refills on his/her beer and nachos.

From the moment the countdown clock began ticking back from five minutes to show time the arena was filled with a palpable electricity. Coming on stage with thrilling fanfare, Mother Monster commanded the screaming, dancing, sequined clad crowd’s attention. Oscillating between all five albums, the set list aimed to please everyone from die-hard Little Monsters to newer fans only familiar with the latest album Joanne which gives name to the tour (JoAnne World Tour) witnessed Sunday night.

Gaga is beyond the definition of performer. She entertains, she connects, she fills the arena with love, understanding and acceptance. She creates a safe space with her music. She gets the crowd jumping, paws up on her more pop-inspired songs with colorful costumes and impressive dance choreography and unifies with her ballads about family, hope, and fortitude.

Impressive was her ability to be so relatable to her fans. She exuded sex appeal in skin-tight, sparkly body suits and yet she gives off the air of being your best girlfriend or your older sister’s badass friend that you idolize. She interacts with her crowd in a way that makes you believe she actually wants you to internalize her lyrics about strength and power.

The well-choreographed dancers that did so much more than dance, they emoted strength and energy, the band that knew when to power up and when to soften, Gaga herself, who has a voice to be reckoned with, powerful and pure…They all came together to put on the best party and it was a party that for sure kept the Little Monsters aboard the Mother Ship.