Bare Bones by the Civil Wars – A Review 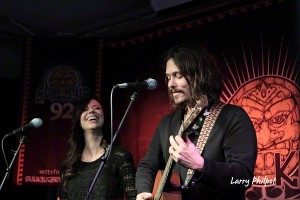 Yes, yes. There’s no need to adjust your glasses nor consult your optometrist; you read that headline correctly. Despite going on hiatus in November 2012, Nashville folk duo The Civil Wars have released a 6 track EP. Entitled Bare Bones EP, the effort is quite true to its name, and really paints a stripped down, raw version of Joy Williams and John Paul White that fans may not have been exposed to before. After all, the EP features entirely acoustic or alternative versions of their preexisting tracks. Of course, the question of the hour is does it work. Can this Grammy nominated pair of musicians still pump out great tunes, even after a year long break? Rest assured, Civil Wars fans, that the answer to this question is a resounding yes.

The album begins with an alternate version of the track “Oh Henry”, which first saw the light of day on the duo’s self titled album that dropped last August. In comparison to the original version of the song, this alternate version is very stripped down, and removes a lot of the funk that stood in the way of the band’s most marketable feature: their insane harmonies. Yes, the great songwriting and clear guitar tones are still there, but the production is much rawer and more organic. This really does a great job of highlighting just how spectacular the harmonizing really is.

After an alternate version of “Eavesdrop”,  listeners will arrive at the next standout track on Bare Bones, an acoustic rendition of “Dust to Dust”. Be warned, readers, as this mellow track has been known to cause extreme haziness, relaxation, and in some cases, even introspective thought. We recommend listening to this one with some sort of warm beverage in a warm, cozy indoors environment. Really try to pay attention to the lyrics in “Dust to Dust”, as this song is a stellar example of the songwriting ability possessed by this fantastic duo.

Track number five is an acoustic take on “The One That Got Away”, which is likely to most popular Civil Wars tune outside of that one that was in The Hunger Games. Fans of the original version of the song will definitely want to check out the acoustic version, as this is likely the song that least resembles its original counterpart on Bare Bones. That is not to imply, however, that the acoustic version of “The One That Got Away” is bad by any means; if anything, it crafts a clearer, more poignant lens through which listeners can examine the core of the song. Both editions of this amazing track are brilliant pieces of songwriting, and the acoustic version will allow fans to celebrate that as never before.

Bare Bones concludes with their acoustic version of “I Had Me A Girl”, which in the opinion of this author is the best song the Civil Wars have ever put out. The acoustic version is no less sensational, and features the same in your face lyrics and vaguely Scottish counterpoint that made the original such a hit. If, by some unfortunate circumstance, a crazed music fan held you at gunpoint and threatened to kill you if you didn’t tell him the best Civil Wars track, this wouldn’t be a bad option. That’s just another friendly piece of advice for our readers from us here at On Stage.