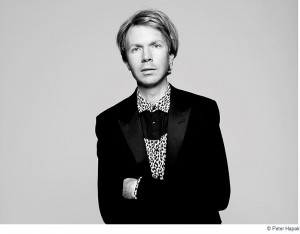 As 2014 album of the year front-runner Morning Phase (Capitol) refuses to budge from the top 40, Beck has extended his rapturously received current tour by nearly a dozen new dates. The newly announced shows begin July 11 at the Uptown Amphitheater in Charlotte, NC and run through the summer — including appearances at Nashville’s famed Ryman Auditorium, at Merriweather Post Pavilion in Columbia, MD, and concluding with a sure-to-be-legendary August 14 headline at Red Rocks in Morrison, CO. Beck will also headline both weekends at Austin City Limits in October.

As anyone who caught jaw-dropping recent turns at Coachella, last month’s Austin City Limits TV performance (to air this fall a date TBA in the venerable PBS series’ 40th anniversary season) or elsewhere can attest, Beck’s upcoming dates are not be missed. A glance at the reviews of this most recent run easily puts them among the most enthusiastic raves of his — or anyone’s — career:

“Inside a three-tier-brimming ACL Live at the Moody Theater last night, from the first song to the last… Beck rocked the flock… hypnotized the hall… hard in lyric and voice, but cushioned by singer-songwriter intimacy… crescendoing into a Zeppelin-like stomp…. tapped serious delirium from both band and audience”–AUSTIN CHRONICLE

“Like a fisherman casting a lure, Beck on Sunday night offered a lesson in how to draw a tired, coming-down crowd and muster one more burst of adrenalin… In doing so, he presented a convincing argument as being a godfather to this holy Coachella mess, one in which said pop music sub genres could not only live harmoniously but also spawn a new vibe”-LOS ANGELES TIMES

“Stunning… a glorious sampler, as sonorously rich as his brilliant new album”-OC REGISTER

Check Beck.com for information on ticket sales, additional dates as they are confirmed and announced, etc.