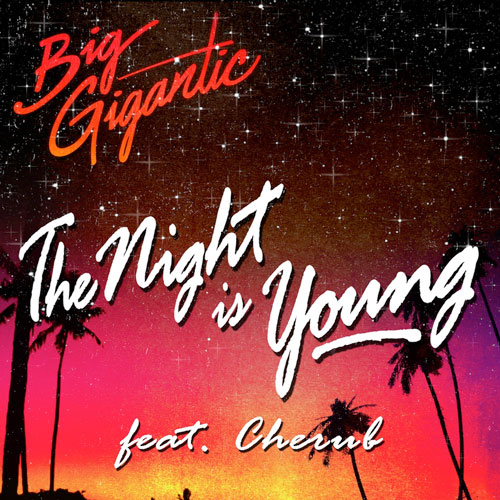 Album: The Night is Young

If you’re even marginally involved in the electronic music scene, chances are you’ve come across Big Gigantic. Even if you just go to a festival or two each year, you’ve probably been exposed. Not that this is a bad thing; Big Gigantic happens to be one of the strongest forces in the electronic music scene these days. Thus, it should come as no surprise that the release of a new Big Gigantic album was pretty big news, but then came along the announcement that this album would be released for free. That’s right, you can pick up Big Gigantic’s new album, The Night is Young, without paying a single penny. All you need to do is swing by their website. The album features popular dance duo Cherub, but really, what else do you need to know. It’s a free album put together by two of the biggest names in the EDM scene, and that can only mean one thing: it’s time to bust out the old dancing shoes and start shaking those hips to some great tunes.

The Night Is Young starts out with the uniquely named “Clvdbvrst”. Within the first three seconds of the song, you’ll run into almost all of the hallmarks of a classic Big Gigantic track. You’ve got your dubstep-y drums, otherworldly female vocal hooks, and theatrically intense strings. The only thing missing is a swinging sax line, but fret not dear reader, for the sultry and atmospheric sounds of Dominic Lalli’s saxophone drop in at the thirty second mark. From there, the song transitions into a build, which grows and grows and grows until Big Gigantic reaches one of their most satisfying drops around a minute into the song. Song order is a pretty big deal in an album; musicians and producers tend to spend quite a bit of time figuring out exactly when a particular track will appear in an album. We’re sure that Big Gigantic did just this while putting together The Night is Young, and to be honest we couldn’t think of a better song to take the place of the first track. “Clvdbvrst” sets exactly the right kind of precedent for the rest of the album and draws listeners further down the Big Gigantic rabbit hole that is The Night is Young.

The albums continues with “Blue Dream”, which is simultaneously a decent dance track and a blatant reference to the ever popular strand of weed. Things really kick off when listeners get to track three. This song, the titular “The Night Is Young”, is the first listeners will hear of Cherub. While uninformed listeners might assume that Cherub and Big Gigantic create music in exactly the same style, those with a deeper understanding of the nuances of EDM will notice this track is an intricate blend of the styles of both duos. Somehow, the track is also vaguely reminiscent of the general vibe of yet another popular dance duo, Daft Punk, but don’t take that to mean “The Night Is Young” is an uncreative track. Instead, this song should be a viewed as delicate dance concoction, masterfully crafted from the highlights of several different EDM niches. Plus, “The Night Is Young” features one of the catchiest saxophone/lead lines in the album, so really, what else could you want. “The Night Is Young” is without a doubt one of the strongest songs of the album (which might explain why it became the title track).

Following “The Night Is Young” is “Touch the Sky”. If you’re a fan of Big Gigantic, you might have already heard this track, as its one of their most popular tunes. Whereas much of the rest of The Night Is Young” straddles the line between dance and dubstep, “Touch the Sky” undoubtedly falls on the dubstep end of the spectrum. That means that the drops are huge, the chill section is, well, chill, and you can expect some pretty tripped out sound effects. It’s easy to see why this is one of the most beloved Big Gigantic tracks out there, especially when you consider the utter dominance of dubstep in the EDM scene the last few years. All in all, “Touch the Sky” is a great track to throw on at a party or crowded public event if you want to get some bodies moving.

“Let’s Go!” is the sixth song and next standout track on The Night is Young. Perhaps the best part of this song is the careful crafted series of drops. Each build forces listeners to get prepared, but then the song cuts back a bit, only to build up again and cut back one more. In fact, listeners won’t reach a real climax in “Let’s Go!” until the 1:34 mark, which is pretty impressive considering the song clocks in at just over four minutes. This series of builds instills a remarkable forward momentum to the song that is sure to grab listeners tightly and hold them close throughout the conclusion of the song.

We round out The Night is Young with a rather interesting track titled “Shooting Stars”. Whereas most of the tunes in this album are very upfront, in-your-face dance tracks, “Shooting Stars” applies a more relaxed and thoughtful approach. The song both begins and ends in silence, and the sax driven swell of music in the middle is nothing short of spectacular. Once the drum tracks arrive (just after the first minute), listeners will immediately realize they’ve stumbled across something special. To really get a feel for the beauty of “Shooting Stars”, play particularly close attention to the interplay between the different parts, especially the lead and harmony sax parts and the synthesizers. The track is basically riddled with small intricacies allowing these parts to play off each other as satisfyingly as possible. Many listeners don’t even realize tiny touches like this even exist in the music, but the truth it is precisely these touches that allow Big Gigantic to distinguish themselves from the rest of the burgeoning EDM scene. While it is easy to pick these out in slower tunes like “Shooting Stars”, you can find them throughout The Night is Young. It is for this reason that we’ve concluded The Night is Young is one of the most impressive and mature Big Gigantic releases to date. Go ahead and give the tracks a listen and let us know what you think!