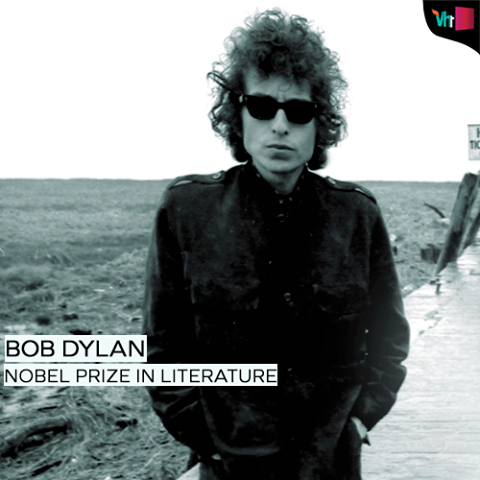 Bob Dylan is the poet laureate of the 60’s generation. Free thinking, intelligent, complicated, yet simple at the same time. Dylan has been angry, tender, and poetic, as well as prophetic. He’s a study in beautiful contradictions, as most artists were during that era, “when the times, they were a changing.” They were the vanguard.

Dylan teaches his fans how to stay forever young, by not standing still.

The Nobel Prize is the  most prestigious award available in the fields of literature, medicine, physics, chemistry, peace, and economics. Winning a Nobel Prize is a big, damn deal. It’s the equivalent of a Supreme Court ruling for people into this kind of stuff. The Nobel judges made a declaration on Thursday, October 13th, in the year our lord, 2016, that Bob Dylan is not just a rock star, but a poet of the very highest order.

The Nobel Prize in Literature for 2016 was awarded to Bob Dylan “for having created new poetic expressions within the great American song tradition”.

In 1895, Swedish inventor, chemist, engineer, inventor, businessman, and philanthropist Alfred Nobel, known for inventing dynamite, established the prizes in his will. He experienced a macabre glimpse into his future after reading a premature obituary published in a French newspaper. The newspaper  erroneously reported his death and published an editorial condemning him for his invention of dynamite.  These events are said to have brought about his decision to leave a better legacy and he bequeathed his fortune to institute the Nobel Prizes. The obituary stated, Le marchand de la mort est mort (“The merchant of death is dead”) and went on to say, “Dr. Alfred Nobel, who became rich by finding ways to kill more people faster than ever before, died yesterday.”

“I intend to leave after my death a large fund for the promotion of the peace idea, but I am skeptical as to its results” Alfred Nobel

The prizes in Chemistry, Literature, Peace, Physics, and Physiology or Medicine were first awarded in 1901. The prize ceremonies take place annually in Stockholm, Sweden (with the exception of the peace prize, which is held in Oslo, Norway.) Each recipient, or laureate, receives a gold medal, a diploma, and a sum of money that has been decided by the Nobel Foundation.

The New Yorker published a piece in which its writers discuss their favourite Dylan lyrics.

I’m glad to say that it’s been a while since I felt a personal identification with Idiot Wind, but the furious castigation and the reeling pain conveyed by that song have spoken for me more times than I care to recall. Critics will argue about Dylan’s place in the canon, or about the rightness of bestowing a prize upon a writer whose celebration doesn’t particularly help the publishing industry. But, for my money, anyone who can summon, as a bitter valediction to a lover, the line “I can’t even touch the books you’ve read,” knows—and captures, and incarnates—the power of literature.

The legendary music journalist Everett True emails to say he has written some thoughts on Dylan’s award. They include:

Bob Dylan winning a Nobel Prize for Literature says everything about the establishment’s understanding of the appeal of popular music – ie it has none.

Our favorite Dylan song is Tangled Up in Blue.

We’d love to know which song is your favorite and why?