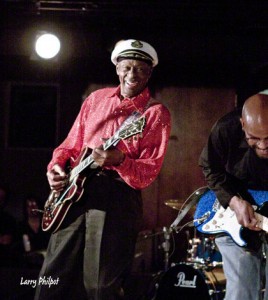 Updated from 2013.  Chuck Berry, the entertainer that copied nobody turns a year older today, to little fanfare. In honor of this, it may be fitting to not only wish him a happy 90th, but to acknowledge the influence and impact he had on today’s musicians with video examples.  Widely thought to have been the pioneer who broke down racial barriers in rock music, because on dance shows and clubs, white people danced on one side of the dance floor and blacks danced on the other side, separated by a rope.

Known as the father of Rock and Roll, his music and style inspired countless musicians. The Rolling Stones’ Keith Richards has said that everything he knew, he stole from Chuck Berry.

When it comes to stealing from Chuck Berry, listen to the two songs below, and you decide: