The Civil Wars’ self-titled sophomore album is now available to stream in its entirety for one week exclusively on the iTunes Store in the U.S. and Canada (iTunes.com/TheCivilWars). 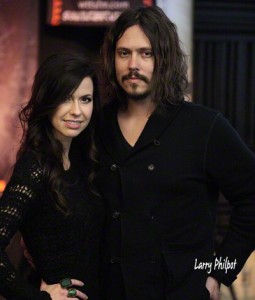 Out next Tuesday on Sensibility Music/Columbia Records, The Civil Wars is the highly anticipated follow-up to the duo’s two-time Grammy-winning, RIAA Gold debut Barton Hollow and is already receiving widespread advance acclaim. Billboard describes it as “impressive,” while Ann Powers of NPR Music calls it, “…powerful, rewarding music.” Additionally, Rolling Stone declares the album’s first single, “The One That Got Away,” as “proof of the still-amazing chemistry between singer-songwriters Joy Williams and John Paul White,” while USA Today calls it a “…bluesy, pining single” and Entertainment Weekly asserts, “a crackling, morose blues-rock ballad…that swells with moments of fury.”

In anticipation of the release, Williams recently sat down to describe the origins and story behind each of the album’s tracks — see below for her track-by-track descriptions.

FIRST SINGLE, “THE ONE THAT GOT AWAY,” #1 MOST ADDED AT TRIPLE A RADIO, MUSIC VIDEO ADDED TO VH1 AND CMT

The Civil Wars’ self-titled sophomore album is now available to stream in its entirety for one week exclusively on the iTunes Store in the U.S. and Canada (iTunes.com/TheCivilWars). Out next Tuesday on Sensibility Music/Columbia Records, The Civil Wars is the highly anticipated follow-up to the duo’s two-time Grammy-winning, RIAA Gold debut Barton Hollow and is already receiving widespread advance acclaim. Billboard describes it as “impressive,” while Ann Powers of NPR Music calls it, “…powerful, rewarding music.” Additionally, Rolling Stone declares the album’s first single, “The One That Got Away,” as “proof of the still-amazing chemistry between singer-songwriters Joy Williams and John Paul White,” while USA Today calls it a “…bluesy, pining single” and Entertainment Weekly asserts, “a crackling, morose blues-rock ballad…that swells with moments of fury.”

Released June 11, “The One That Got Away” was the #1 most added song at Triple A Radio upon release and debuted at #30 at the BDS Triple A Chart after only six days of airplay. The music video for the song, “The One That Got Away (Studio Cut),” has also been added at both VH1 and CMT. In addition to the music video, a special behind-scenes-video of the duo is available to view at NPR Music, while a video featuring the album track “Same Old Same Old” recently premiered at VH1 and CMT. Moreover, in anticipation of the release, Williams recently sat down to describe the origins and story behind each of the album’s tracks — see below for her track-by-track descriptions.

The Civil Wars was recorded in Nashville between August 2012 and January 2013. Charlie Peacock was once again at the helm as producer for the album. Additionally, Rick Rubin produced the duo’s performance for the track “I Had Me a Girl” in August of 2011. Peacock later completed the track by producing the instrumentation and mix.

The album was recorded amidst a grueling touring schedule, exhausting workload and a growing disconnect from their families. Personal statements from band-members Joy Williams and John Paul White can be viewed at www.thecivilwars.com.

1. The One That Got Away

“The One That Got Away”

This song pays homage to regret. Nearly everybody I’ve come across has somebody in their life that they wonder what life would be like if they’d never met that person. It’s that sliding-doors moment — in the blink of an eye everything could change. Either for the positive or the negative.

John Paul and I wrote this song in the screened-in porch of my and Nate’s new home. I remember warm breezes blowing, a mild day. I had recently had my son, Miles, who happened to be asleep with Nate in the living room, right next to the porch. I remember asking John Paul to play quietly so he didn’t wake up the baby.

This song always conjures up an image of a glass of whiskey and a lit cigarette. It’s a little brooding. A little dangerous. It smolders. It has swagger and grit. It’s full of innuendo and Southern Gothic tones. I love the feel of this track, and the way this song came together on the record. “I Had Me a Girl” is one of those musical moments that makes me wish I knew how to play electric guitar. Or any guitar, for that matter.

This song, to me, represents the ache of monogamy. This isn’t an “I’m leaving you” song. It’s a vulnerable confession of “I don’t want to leave. I want to work on this — with you.” Having said that, someone once told me a story about long-term relationships: to think of them as a continent to explore. I could spend a lifetime backpacking through Africa, and I would still never know all there is to know about that continent. To stay the course, to stay intentional, to stay curious and connected¾that’s the heart of it. But it’s so easy to lose track of the trail, to get tired, to want to give up, or to want a new adventure. It can be so easy to lose sight of the goodness and mystery within the person sitting right in front of you. That continent idea inspires me, and makes the ache when it comes hurt a little less. To know that it happens to all of us. What I’m realizing now is that sometimes the “same old same old” can actually be rich, worthwhile and a great adventure.

This song is an anthem for the lonely. Sometimes you come across somebody who thinks they are hiding their pain, but if we are all honest, nobody is very good at it. “You’re like a mirror, reflecting me. Takes one to know one, so take it from me.” When John Paul and I wrote this late one night in Birmingham, England, we decided to change the pronoun at the end of the song. We wanted to represent that we all experience loneliness in our lives

We brought in our producer, Charlie Peacock, on this song. He helped with arrangements and really helped take the song to a totally different place. Sometimes as an artist, you can’t see what needs re-arranging when you’re so “in it.” Charlie brought perspective. Almost like an eavesdrop within an “Eavesdrop.”

Strangely enough, this song always reminds me that my voice has changed since the last album. I have my son to thank for that, truly. When I was first pregnant and performing on the road, I thought something was wrong with my voice. I was having a hard time hitting high notes, while my low notes kept getting deeper and deeper. I did some research with the help of a vocal coach, and learned that hormone levels affect a female singing range. Having a boy, naturally, upped my testosterone levels, making low notes easier to hit and higher notes harder to reach. But the great thing? After having Miles, I regained my high range AND have kept my low range. Pregnancy literally changed the makeup of my vocal cords. There’s a different timbre to it now, and I love that I can hear the story of my son in my singing.

This song is our take on an Americana murder ballad. It’s dark, prickly, anxious. It was fun writing because we just imagined some dust-bowl scenario, a broke-down town, and a man awaiting being hung for something he did in the name of trying to provide for his family. The woman who loves him is watching him standing there on the gallows.

This song always reminds me of when the melody first came to mind. I was doing my makeup in the tiled bathroom upstairs, with my newborn Miles in a yellow rocking bassinet next to me. I started singing, and turned on the voice memo app on my iPhone so I wouldn’t forget it. As I sang, Miles started cooing along with me. Not on pitch, mind you, but I’d move a note, and he’d move a note. I’m never deleting that voice memo. It’s become one of my favorites.

That’s our Grand Ole Opry song. A new spiritual. It’s actually the oldest song written on the album. We wrote it before Barton Hollow came out. Even though we didn’t have our own recording of it, we started performing it live and it became a fan favorite. It made sense to finally put it on an album. One of my favorite moments on stage every night was singing the a cappella part together.

We recorded the performance at Fame studio in Muscle Shoals, a place we’d written a few songs before that made it onto Barton Hollow. I always felt the musical ghosts in that studio, one of whom was the great Etta James. We’re a band that’s known for covering songs live in our own way, and we thought it would be fun to take a stab at “Tell Mama.” I found out later that where we recorded was the same room she recorded her version. That might explain why I kept getting goosebumps.

We wrote it one week before Barton Hollow, in the mountains of Salt Lake City during our first Sundance Festival. We conjured up a story about a woman who was married to a philandering man. She is begging her man to level with her, and letting him know she can only take so much, a la “it’s gonna kill me or it’s gonna kill you.”

Again, we’re the band who loves to do covers. Both John Paul and I have always been huge Smashing Pumpkins fans. Nate mentioned it might be a cool cover, and we actually wound up working it out the same day that we wrote “Oh Henry” up in Salt Lake City for Sundance. It turned into another on-stage staple that people asked for every night. We found out later from his then-manager that Billy dug it.

We wrote this song in a flat in Paris, with the Eiffel Tower in full view on a cold night. Tall windows, Victorian furniture, and somehow the atmosphere of all of that seeped into the song. Nate and our friends were there in the room as we wrote, all of us drinking wine together. I also loved getting to try out my flawed French. I wrote what words I knew in French, and then had a Parisian friend named Renata Pepper (yes, that’s her real name) look it over later and help me translate. When we recorded the song for the album, I called in a French professor from Vanderbilt named Becky Peterson, who has now become a good friend.

We wrote this song in the studio behind my house in Nashville, on a warm summer day, with the windows and doors open. This song is a sweet lament, of loss and the belief that you’ll never be able to love anybody else again. I stumbled across “Letters of Note” on Twitter, and was struck by the title of a letter written by a famous physicist named Richard Feynman: “I love my wife. My wife is dead.” A little over a year after her death, he wrote his wife a love letter and sealed it. It was written in 1946, and wasn’t opened until after his death in 1988. He ended his note to his long-lost wife with “Please excuse my not mailing this¾but I don’t know your new address.”

Another aside to this song: While we were recording the song together, John Paul and I could hear crows cawing in the background that I’ve since named Edgar, Allen and Poe. This recording and performance of the song is the first and only in existence, a work tape recorded simply on my iPhone.