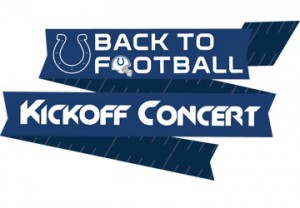 INDIANAPOLIS – Football is Back, and to celebrate, the Colts will host their first ever Kickoff Concert this Friday, September 6, from 6-10 p.m. in Downtown Indianapolis along the west block of Georgia Street. The concert, which is free and open to the public, will feature multi-platinum recording artist Gin Blossoms (bio and photo attached), performers of the smash hits “Hey Jealousy”, “Found Out About You”, “Allison Road”, “Until I Fall Away”, “Til I Hear It From You”, and “Follow You Down.” The concert’s opening act will be the Dane Clark Band, featuring John Mellencamp’s drummer Dane Clark. The event is part of the team’s “Countdown to Kickoff” efforts celebrating their 30th season in Indianapolis.

The Colts will host the Oakland Raiders at Lucas Oil Stadium two days after the concert, on Sunday, September 8, for their regular season home opener. Kickoff is at 1:00 p.m. The Colts Kickoff Concert is made possible through the support of 1070 AM and 107.5 FM The Fan, as well as Downtown Indianapolis Inc. For more information, visit www.colts.com/kickoff.

Between Illinois St. and Capitol Ave.

COST: Free and open to the public

*Event Note: While the NFL’s clear bag policy will not be enforced for this event, all bags will be subject to search.

About Colts Countdown to Kickoff

On August 9, the Indianapolis Colts launched a special 30-Day Countdown to Kickoff to commemorate the team’s 30th season and build excitement around their home opener on Sunday, September 8. For 30 days, the team is providing daily social media contests and promotions for fans, stops by Blue’s Fan Van and several events for fans of all ages. In addition, fans are encouraged to use #ColtsKickoff on social media to share their excitement for the start of football. For more information, visit www.colts.com/kickoff.