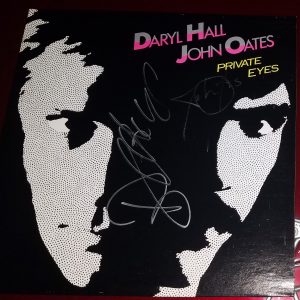 “I Can’t Go for That,” was written by Daryl Hall, John Oates, and Sara Allen in 1981 during a recording session of their album, Private Eyes. Daryl Hall spoke on “Live From Daryl’s House” saying this song was specifically about not bowing to the wishes of his record label. The song was released as the second single from their tenth studio album.

On January 30th, 1982 “I Can’t Go for That (No Can Do)” reached #1 on the billboard charts. It has the distinction of being the first single to appeal to both white and black audiences, reaching #1 on the 1982 R&B Charts as well as the Pop charts. This was the song that knocked Olivia Newton-John’s “Physical” out of #1 in America after a 10 week stay at the top spot. It also prevented Foreigner’s “Waiting For A Girl Like You” from reaching #1, which had been #2 for nine straight weeks while “Physical” was in the top spot.

Thanks to heavy airplay on contemporary radio stations, Hall & Oates had success before the release of this single, with chart-toppers like, “She’s Gone”, “Sara Smile”, and “Rich Girl’. They managed to incorporate the highly popular synth pop genre and R&B using memorable harmonies, catchy tunes, and vibrant videos tailor-made for the MTV generation. Charles DeChant’s  sax solo helps make this a unique pop song and the use of the mechanical drum sample  in the opening of the of the tune plays throughout the rest of the melody. The song has a stark, contrasting harmony and the melody is a constant repetition of “I can’t go for that,” within the chorus.

Hall & Oates were popular artists for the imaged based MTV channel. In only a year, MTV had become the main source in the country for mass music distribution, music videos as well as the development of the Walkman which allowed for music listening on the go. MTV is one of the earliest and greatest cable success stories.  Warner Amex Satellite Entertainment Company (WASEC) established MTV after extensive marketing research. It served as a new promotional tool for recording artists, a new advertising vehicle for manufacturers, and a unique program format for cable operators. Originally, music videos were provided free by record companies. This inexpensive source of programming would make MTV a profitable venture more quickly than other forms of programming. Since its premiere in 1981, MTV has revolutionized the music industry. Slogans such as “I want my MTV” are part of pop culture history and the concept of the VJ (video jockey) was introduced.

To capture the attention of teenage viewers, musicians during the 80’s played up the ideas and images of androgyny derived from the likes of glam-rocker David Bowie, and new wave artists like Flock of Seagulls, and Duran Duran. Hall & Oates started teasing their hair and adopting an 80’s silhouette with exaggerated shoulders, creamy pastels, and fog-machines. The music video for this single is a direct reflection of the smooth, corporate, and ironed out image of artists during this time, with a very clean and smooth feel.

Michael Jackson has confessed that this song greatly influenced his hit, “Billie Jean.”According to Daryl Hall, during the recording of “We Are the World”, Michael Jackson approached him and admitted to lifting the bass line for “Billie Jean” from a Hall and Oates song, apparently referring to “I Can’t Go for That (No Can Do).” Hall recalled, “Michael Jackson once said directly to me that he hoped I didn’t mind that he copped that groove. That’s okay; it’s something we all do.”

John Oates (from an interview with Livedaily) said: “‘I Can’t Go for That’ is one of the most sampled songs from our catalogue, maybe ever for all we know. It’s been sampled on so many songs. I can name five or six versions of it. Just last year Simply Red did a song called ‘Sunrise,’ which was basically ‘I Can’t Go for That.’ The entire song. It wasn’t a sample, it was the actual track. He just wrote a different verse over it. Puff Daddy sampled it, De La Soul sampled it. I like it [when our music is sampled]. I like when people have a different take on what you do. That’s quite a compliment.”