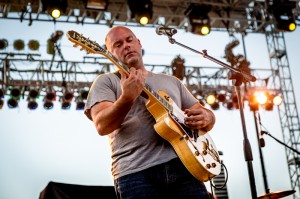 Despite the fact that the rain let up briefly, only a small, dedicated crowd was on hand when The Easthills took the stage Wednesday night at the State Fair to begin what was a solid 45 minutes from the band, who was opening for Grand Funk Railroad.  But even when it began raining, the fans still stayed.

If you aren’t aware, The Easthills are a band hailing from Indiana, but have been getting much exposure from opening for bands such as Grand Fund Railroad, Cracker, Rusted Root and Night Ranger, who they are opening for August 25th in Fort Wayne.  The band was performing ahead of their upcoming EP release.  Wednesday night had Hank Campbell, Will Barada and Wade Parish.  Joining them were Dave Barajas on bass and Doug Henthorn on lead guitar.  Barajas has been a welcomed addition to this band, playing with them for a few gigs now, and fitting in quite nicely.  Indy fans may recognize Doug Henthorn from the band Healing Sixes, or playing with such notables as Joe Bonamassa or John Hiatt.

They started the evening off with Will announcing that he was going to “Expose Myself”, followed quickly by a disclaimer explaining that it is in fact the title of the song.   They played several songs off their previously released albums, such as Mouthkissing, Georgia Pine, Holiday Woman, Mothers & Fools, My Morning Highway, and Love, Love, Love. They also played their newest song from their upcoming EP, Piss & Vinegar.  But perhaps most fittingly, due to the fact that it kept raining off and on during their whole set (so much so I literally had a pocket full of water in my raincoat – I’m still trying to figure that one out), they played Crippled (Broken) Indian Anthem, where the lyrics are: “calling rain gods, his home is in the wind, his folks don’t give a shit”.  They even commented after the song that the rain gods were unfortunately listening.

Overall it was a great show, given the circumstances they were playing in.  I’ve seen them in better weather and look forward to the next time I can see them in drier conditions.  If you are in or around Fort Wayne, try to check them out August 25th.  Otherwise, they will be playing in Indianapolis at the White Rabbit Cabaret on September 07th.  You can find The Easthills on Facebook and Twitter.