George Strait opened his Vegas run on Friday night by honoring Country Legend, Merle Haggard. Strait played for more than 2 hours to a sold-out crowd of 19,222 fans on the first night of his Strait to Vegas shows at the T-Mobile Arena in Las Vegas, Nevada. George Strait is on tour and promoting his recent release, “Cold Beer Conversation.” Strait’s set list includes hits, “Give It All We’ve Got Tonight,” “Ocean Front Property,” and “All My Ex’s Live in Texas” but he took a few minutes to offer up a tribute to Merle Haggard, who passed away on April 6 after struggling with health issues for several months.

“I’m very excited to be coming back out and playing for the fans out there,” Strait said in the press release. “I’m really looking forward to it so much. Come April, it’ll be about a year and 10 months since I performed with my band … It’s gonna be exciting to get back out there again. I’m looking forward to singing those songs that I love so much.”

Kacey Musgraves opened for Strait on Friday, and she’ll open the rest of his scheduled Vegas run, which includes more dates in April, as well as shows in September and December, and February of 2017. 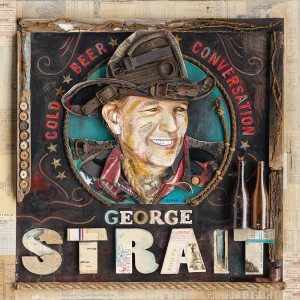