Ghost is a Swedish heavy metal band known for its eccentric and visually disturbing performances.

The biography on their fb page states: 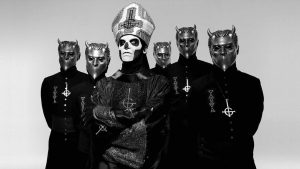 Ghost is the name of a devil worshipping ministry, that in order to spread its unholy gospels and, furthermore, trick mankind into believing the end is ultimately a good thing, have decided to use the ever so popular rock music medium as a way to achieve their ends.

Standing motionless and anonymous beneath the painted faces, hoods and robes which their sect demand, the six nameless ghouls of Ghost deliver litanies of sexually pulsating heavy rock music and romantic lyrics, which glorify and glamorise the disgusting and sacrilegious, with the simple intention to communicate a message of pure evil via the most effective device they can find: Entertainment. This is Black Metal at it’s most original and deceiving; compositions such as “Ritual” and “Death Knell” majestically weave their melodic spell of evil through the senses until the listener finds themselves utterly possessed and open to any diabolical suggestion

Five of the group’s six members wear virtually identical, face-concealing costumes and call themselves, “Nameless Ghouls.” The most distinguishable member is the vocalist, Papa Emeritus, who wears a prosthetic face with skull face paint, appearing as what can only be described as a “demonic anti-Pope”.

From the time the group was formed in 2006, the real identity of each member has been unknown. In an interview with one of the Nameless Ghouls, concealing their identities is purposely done to let their audience focus on their music and artwork instead of the members.

For years, rumors swelled regarding just who was under the demonic pope hat and makeup, and recently (1APR2016) Alternative Nation revealed the identity of Papa Emeritus.

Check out their Live Nation Video, “Ghouls Just Wanna Have Fun” below.