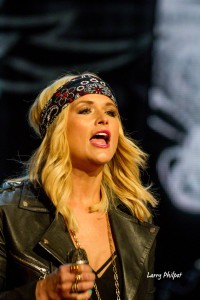 When Miranda Lambert competed on Nashville Star in 2003, she immediately became a huge star. Following in the same vein as Chris Daughtry on American Idol, she didn’t win, but has become the most famous singer to come out of the show.
Onstage had the opportunity to catch her fabulous show in Indianapolis earlier this year, where she brought down the house. While she loves a good time performing, we found that beach balls annoy her at concerts so she carries a box cutter at every concert where she makes short work of the intrusions, which she calls annoying.
Hailing from Texas, Miranda’s parents had their own private investigation firm in Lindale, where they once represented Paula Jones in one of former President Clinton’s scandals. The business fell on hard times, and the family lost their home.
Miranda’s music idols are old country icons, Merle Haggard and Loretta Lynn, but she is also a huge fan of Beyonce’. Check out the youtube video of her 2014 CMA Festival entrance to Beyonce’s “Who Run the World”.