Tonight: The Head and The Heart 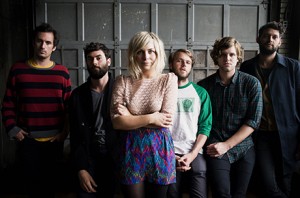 Formed in Seattle by a group of northwestern transplants, the Head and the Heart is an indie folk band whose influences include Americana, country-rock, and classic Beatlesque pop. The lineup came together in 2009, when songwriters Jonathan Russell and Josiah Johnson met at an open mic event at Seattle’s Conor Byrne Pub. Pianist Kenny Hensley, bassist Chris Zasche, violinist Charity Rose Thielen, and former Prabir & the Substitutes drummer Tyler Williams rounded out the roster, and the Head and the Heart spent the first half of 2010 touring the Pacific Northwest before self-releasing their eponymous debut in June. By the end of the summer, they’d created enough buzz in the Pacific Northwest to entertain offers from several record labels, eventually signing with Sub Pop that Fall and reissuing their album — this time with remastered tracks and one new song — in early 2011. ~ Andrew Leahey, Rovi