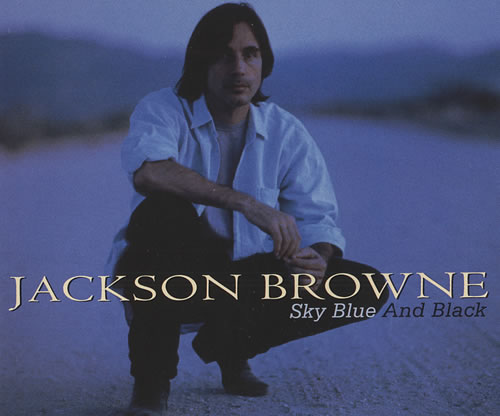 Acknowledging Jackson Browne’s birthday today we discuss his song, “Sky Blue and Black”. It is a complex, emotionally charged, and mostly inaccurate song, as well as an indictment of the media.

The story, from 1992, had all the juicy elements to make it front page news: rock star, beautiful actress (Daryl Hannah), A neurological diversity called Asperger Syndrome (Autism Speaks) — A developmental disorder affecting ability to effectively socialize and communicate —  JFK’s heartthrob son, John Kennedy Jr, and rumors of violence that supposedly inspired this song.
After this article, there’s a youtube video complete with lyrics, so you can fast forward through my verbiage and listen to one of the greatest songs ever written about love and loss.

Included in this diatribe is (1) a letter from an uncle that could easily be one of these relatives that they interview for one of the Dateline or 20/20 shows, (2) Two letters from Jackson himself, one responding directly TO the supportive uncle, and one from the Police Department who investigated the “domestic incident”, and found “nothing to see here, move on.”

(3) There is another paragraph of an excerpt from an interview with John Kennedy, Jr., who also was the founder of the magazine “George”, who tells his own account of Ms. Hannah, and directly refers to her penchant to exaggerate., and (4) not included, but available by quick search is the actress talking about Asberger’s Syndrome in a Dan Rather interview.

Hannah has never publicly denigrated Mr. Brown, and never pressed charges, so you can draw your own conclusions.  Disclaimer:  To be fair and balanced regarding my opinion:  I’ve been to at least a dozen Jackson Browne concerts, and always by myself except for once. I own signed albums, and have met many current & former band members. I’m longtime friends with slide guitar genius David Lindley, and the current tour manager for both Jackson and CSN, Mr. Crook Stewart III.  I have almost always been at the stage. I have looked into his eyes multiple times and have taken hundreds of photographs of him. I cannot possibly imagine this sensitive, soft spoken, intuitive, emotional man harming someone he loved.

True or not, this is something that Jackson has had to live with since 1992, and was denied at the time by Jackson, and several times later by Ms. Hannah, but sadly, this stuff never goes away, true or not.   It is my understanding that Jackson was the one who called the police that night (she was moving out and he accused her of taking things that didn’t belong to her.)

Included first is a letter from Daryl Hannah’s uncle, stating that he saw the bruises in the hospital.  Jackson’s response to the uncle, a letter recounting the report of Lt. John Miehle of the Santa Monica Police Department, and excerpts from an interview with John Kennedy Jr, who was reportedly the catalyst of the alleged beating, discussing Ms. Hannah’s penchant to make up stories and her ability to provoke anyone to the point of wanting to hit her.

The letters, and the law regarding any domestic violence police run:  http://home.comcast.net/~leslienoelani/TNI.html

I am posting two letters in response to this question, both written to US magazine a few months after the incident.  I am also posting a bit of a Dan Rather TV interview with Ms. Hannah.  The letters and interview were posted to the Jackson Browne mailing list on Yahoo Groups, so they are third generation, so to speak.

I am Haskell Wexler, Daryl Hannah’s uncle. I am, also, a longtime
friend of Jackson Browne and admirer of his artistry.  I am no longer
his friend.

Jackson beat Daryl in September 1992. I was with her in the hospital,
I saw the ugly black bruises on her eye and chin and on her ribs. The
examining doctor reported she had blood in her urine. The doctor was
shocked by the severity and noted Daryl as “a badly battered woman.” I
photographed her at the hospital.

It could be that nobody cares about objective truth anymore. Jackson
is a “good guy,” and good guys don’t beat women. Yes, it is hard to
listen to Jackson and believe he has a hidden side of violence.

I saw the results of the last violent attack on my niece, and there is
no spin of fancy which will erase my shock and disdain for someone who
would beat her up.

(Jackson Browne asked to respond with two letters. One general
response and one addressed specifically to Mr. Wexler.)

It appears that Haskell Wexler has taken exception to your having
printed my assertion that much that was said about this affair in the
tabloids and in the media is untrue. Particularly that the police came
to our house and I sent them away without their having spoken to
Daryl. Further, Fred Schruers actually checked it out with the police,
and that’s more than the other writers that I made the same assertion
to were able to do.  Here is a statement made by Lt. John Miehle of
the Santa Monica Police Department in November 1992:

“The Santa Monica Police Department went to the house where Jackson
Browne lives regarding a possible disturbance. We resolved the
situation in about five minutes. There was never any assault. There
are no charges pending and no prosecution sought by or intended by the
District Attorney. It is this department’s intention that no citizen,
regardless of who she is, suffer any kind of abuse, whether it be
domestic violence or any other kind of assault. But in this case,
absolutely no assault occurred. Our investigators tell us nothing
happened. Nobody has even alleged that Daryl Hannah was even touched.
If they had, we’d be investigating. We’re not hiding anything. The
press is trying to make more out of this than there really is, and
it’s unfair, not just to Browne, but to us. We did our job, and
repeat, no crime occurred here.  This whole thing is ridiculous.”

I agree that we are no longer friends. A friend would never do what
you have done. You have believed the worst about me and not allowed me
the opportunity to defend myself. What’s more, you have participated
in a attack on my reputation and character in which many untrue things
have been said, some of which I think you must certainly know are
untrue, and added your incorrect but very damning assumptions to them.

I tried to reach you, but you would not return my call. I wish you
had.  It would not have been necessary to answer you publicly now.
Obviously you believe what Daryl has told you. Perhaps you think Daryl
has been generous in not pressing charges of battery. But there is a
very good reason she did not press charges. If there was a trial, I
would be able to defend myself in court, and the police who came to
the house and intervened would testify to what they saw there. By her
not pressing charges, the entire description of events has taken place
in the media, where anything can be said and nothing has to be proven.

Your letter states that I beat Daryl. I did not. You describe seeing
her injuries. I suggest that you allow me to describe Daryl’s actions
to you and then judge for yourself as to how those injuries may have
occurred. I repeat: I did not beat her.

I have no desire to expose Daryl to public scrutiny in this matter. I
have avoided describing her actions or characterizing her behavior so
far. It has been hard. I would have preferred to talk to you a year
ago.  Basically, I believe that Daryl has a right to the support and
belief of her family and friends. However, you leave me no choice but
to respond to your public accusations.

JFK, Jr. Interview
The interview was a television interview just before or at the time of
George magazine’s launch; the date on the tape says Nov. 96.

The interviewer brings up Daryl.  He calls it a “queer
relationship…off and on.  She was involved at one point…involved
elsewhere.”  He kind of smiles.

The interviewer asks about Jackson Browne and Kennedy says, “I like
him.  I like his music.  He seems nice enough.”  She asks if he thinks
“it” happened, and he says, “It?  You mean do I think he um, hit her?
No.  I think he probably wanted to, and she knew that.  She has that
effect at times.”  He seems to consider, then says, “Daryl sometimes
exaggerates things…she gets an idea…Daryl is more complex than you
might think.  And I think there was a lot of family pressure, about
Jackson…not his age, just…the families know each other.  And I
think she felt pressure about the way she…they had problems, and I
think some of her family was upset by that. And she felt she had to
say certain things to not be blamed for the problems.  She got stuck
in it, and then had to carry it on.”

The interviewer than asks if he means he thinks Daryl lied, and he
says, “I don’t want to give the impression she does that, but…yes.
I think it got out of hand on her, and now she is stuck with it. He is
stuck too, which is sad.  But I wasn’t there and I don’t know for
sure.  Could he have done it?”  He shrugged.  “Could she make you want
to hit her?  Yes.  But I’m sure I have made women want to hit me, to
be fair.”

I would suggest checking out Browne’s album I’m Alive if you’re really
interested in this subject.  Many of the songs are about his
relationship with Hannah and it’s just a great collection of songs
period.  Also, Joni Mitchell wrote a song about the incident, which is titled “Not to Blame”