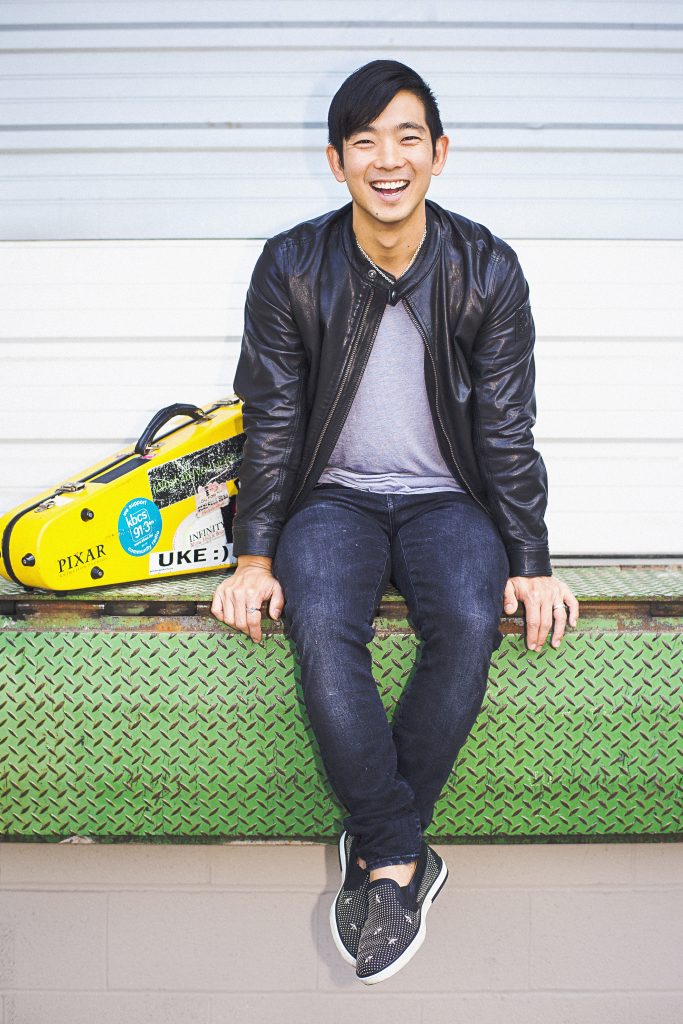 Much like the albums Nashville Skyline and Beaucoups of Blues were projects that were departures, musically, for the artists who recorded them in Nashville – Bob Dylan and Ringo Starr – the latest offering from ukulele maven Jake Shimabukuro, Nashville Sessions, was a very different experience for the Hawaiian-born musician.

Shimabukuro’s style of playing the ukulele is more like Jimi Hendrix than Don Ho, in that Jake’s lively finger work on the fret board of the instrument brings life to the material, be it traditional or truly experimental. And it was Shimabukuro’s innate ability to take the sounds of the ukulele to different levels that came in handy when it came time to record Nashville Sessions.

“I’ve been recording most of my records in Hawaii,” Shimabukuro pointed out, “and I love recording there in my hometown. But with this album I wanted to try something different.

“A couple of years ago I worked with Alan Parsons when he produced my album Grand Ukulele. We did all of the mixing, and some of the recording, in Nashville. I had so much fun being there. I remember thinking ‘this is such an amazing place, so much music is created here.’

“I realized that this place (Nashville) is such a great place for inspiration for any artist. I always thought that Nashville was just country music, but it’s so much more than that. I wanted to go to Nashville and immerse myself in that culture.”

When he arrived in Nashville to record Sessions, Jake got in touch with Nolan Verner, a Nashville session bassist who had been touring with him for almost two years, and asked if he knew a drummer who would want to join them in the studio. Verner recommended Evan Hutchings, another Nashville session player.

“We went to the studio for six days,” recalled Shimabukuro. “I wanted to do a little jazz trio thing. I thought it would be fun to just go into the studio and play, just jam, and see what happens. We weren’t expecting to make an album. We just thought that maybe we could get one or two tracks, which would be awesome!”

Without hesitation, Jake admitted that he was amazed at how quickly the trio jelled in the studio.

These days some artists and bands take months, even longer, to complete the recording process of making an album. But Jake and his colleagues took only six days to finish Nashville Sessions, a process that harkens back to the early days of rock and roll.

“What we did was, basically, recorded the songs live,” Shimabukuro said. “The three of us went in there and hammered out a song. We kept the whole take because we didn’t want to do any editing, we didn’t want to ruin the live feel of it.

“We’d keep a track, then we would go back and listen, and I’d say ‘I think it would be cool to layer another ukulele part over this track, maybe a baritone part or a soprano ukulele part.’ And Evan would come up with a percussion part, go back in and add some shakers or something. Then Nolan and Evan would say ‘It would be cool to put this synth line in there.’ So there’s a couple of songs on the album where there are some electronic synth lines. We just had fun with it!”

While his previous albums had included cover versions of other artists’ songs, Nashville Sessions was Shimabukuro’s first all-original record. Which made this project even more of a challenge for him, one that Jake took on without reservation. The end result was eleven instrumentals that take the listener on a colorful, musically enriched joy ride.

“I’ve never had an all-original record before. On most of my albums there are a lot of covers, because I like taking songs that I grew up listening to, and kind of recreating them on the ukulele.

“I think that being in Nashville I was so inspired to write, you know, being surrounded by all of these songwriters. It was the environment that moved me and pushed me to come up with original ideas.”

Whereas the aforementioned albums by Dylan and Starr were steeped in the country music sound, Shimabukuro’s time in a recording studio in Nashville was spent putting together a collection of songs that featured jazz, fusion, rock, and numerous other musical stylings.

“For the first time I incorporated a lot of different ukuleles on this record,” Shimabukuro pointed out. “Normally I just use my one main axe and record everything with it. But this time I experimented with the baritone ukulele, I even put it through an overdrive distortion thing. I also experimented with the soprano ukulele, the standard-sized one.

“That’s why I think that with this album I’m really stretching myself musically. Even as a composer, I was experimenting with odd time signatures, and different sounds, different colors on the ukulele. I experimented more with amplifiers and vintage gear, to bring out the warmth of the ukulele.”

Shimabukuro enjoyed recording in Nashville so much that he doesn’t rule out recording another album in Music City in the future.

“I would love to have another recording experience there, it’s so cool. After this experience, I have all these ideas I want to try next time.”

And while the material on Nashville Sessions is not the kind normally associated with the ukulele, Jake is adamant that he is still rooted in the instrument’s time-honored origins that his mother first taught him when he was a child growing up in Honolulu.

“(This album) is definitely a departure from the traditional material that I’ve done in the past. But my heart and my passion are still with the traditional roots of the instrument. This was just something that I wanted to explore, a different side of myself. Hopefully people will enjoy it.”

Nov. 7 The Center for the Performing Arts,

The Palladium Carmel, IN