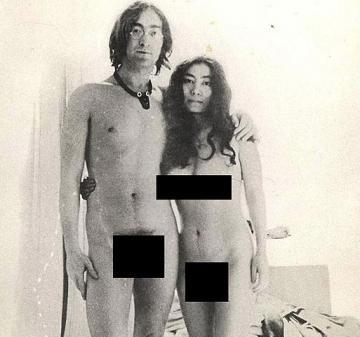 “How do you expose somebody  who posed nude?”

Comedian Conan O’Brien pondered this question in an interview with Rolling Stone magazine twenty years after the tragic death of John Lennon. O’Brien was making a light reference to the controversial album cover of Two Virgins which featured a fully nude John Lennon and Yoko Ono.

The cover created controversy. The album was “experimental” and “Avant-garde” (i.e. unlistenable.) John  and Yoko were influenced by the  primal scream therapy of Dr. Arthur Janov and it is daunting to listen to this angry, noise filled recording. Two Virgins, while failing to chart in the UK, reached number 124 in the US. Phil Spector is listed as a co-producer along with Lennon and Yoko Ono.The parent record company EMI, refused to distribute it until the record was wrapped and sold in a brown paper bag. It reached number 124 in the US.

John Lennon would have turned 76 yesterday. Mark David Chapman’s bullet made that a fantasy and silenced his voice in 1980. The world still mourns this loss. John Lennon played a hugely multifarious and influential role in the world in which he lived and created a legacy to leave behind him that would be just as, or more, extensive and profound.

This album is just one of countless things that Lennon did while alive that, in a way, keeps him so in our hearts and lives. An undeniable influence in style, in culture, and in music, a great effect on the world and world events, and the controversy that made him famous, both then and now are all reminders of the life of the legendary self-proclaimed “Working Class Hero.”