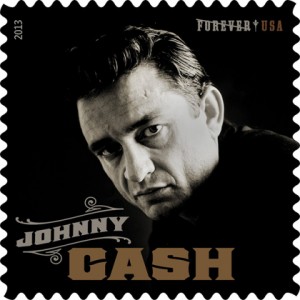 There were street closures all over downtown Nashville last week, with the CMT Awards and CMA festivals in town. Police were redirecting traffic, and rain was coming down pretty hard. It was early in the morning, but people were already lined up in front of the Ryman long before the doors to the famous auditorium opened at 9am. It was Wednesday, June 5th, and my wife and I were in Music City USA to attend the unveiling of the US Postage Stamp bearing the likeness of the legendary “Man in Black” Johnny Cash.

Approaching the long lineup, we ran across the little area between the US Post Office building and the Ryman. There was an unmarked set of double doors, and a small sign on a post said “VIP entrance only.” I had a magic key: a letter from Kay Wagonner, the Senior Publicist of Webster and Associates, I told my
wife that we should try the VIP door. We entered and were greeted by friendly people at a table. They asked our names, hung VIP tags around our necks, and invited us to step inside for coffee and pastries while the performers were finishing the sound check. We were given programs, first edition postcards with
the stamp on them, posters, and assorted other swag. A lady with a wonderful southern accent whispered that we should slip upstairs, where the balcony was not yet opened and I’d have a perfect spot to photograph the ceremony. Check. 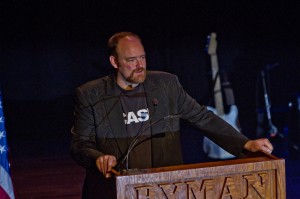 The guest list of entertainers was beyond impressive, with Johnny Cash’s son John Carter Cash taking the lead role. The radio personality for WSM, who narrates the Grand Ole Opry as the official master of ceremonies, was also on hand. Tennessee Governor Bill Haslam opened the show with words of appreciation, and John Carter Cash opened the musical portion with “Folsom Prison Blues.” 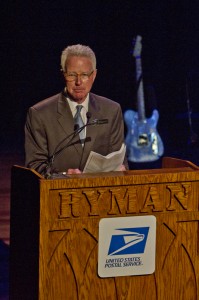 Longtime friend of the family, Larry Gatlin, told a moving story about going to see Johnny about four months before his death. Larry asked Johnny how he was, and Johnny said he was fine, but Miss June wasn’t doing so well. Johnny told Larry that June had requested, if things turned worse, that Larry perform a special song at her services; Larry agreed. Eight days later, June was gone. Soon after that, Johnny too was gone. Larry strummed his guitar and said, “This was the song,” and then performed the Gospel number “I Was There When it Happened.” 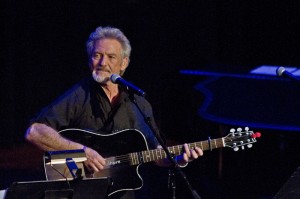 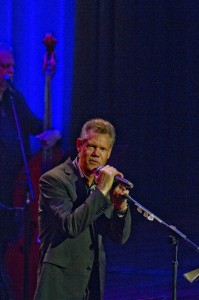 There were songs by Marty Stuart, who not only was a long time friend of Cash but Elvis as well. The Tennessee Three performed a boogie-woogie number and also filled the role of backup band for this wide assortment of musicians. 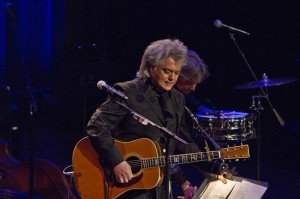 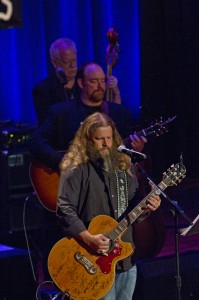 The ceremony turned more somber as members of the Cash family spoke. John Carter Cash announced that before his father passed he wanted to do a video that had some personal meaning to him, a cover tune by Nine Inch Nails called “Hurt.” For anyone who has seen this video, it’s easy to understand why Johnny posthumously received a Grammy for Music Video of the Year. John Carter said that they would try to sing that song for us, but were sure that they’d fall far short of the emotion that Johnny had put into it. With the first two lines, I turned around to see a man behind me nod to me with an unspoken message that
“Oh, he’s going to nail it.” And he did. I lowered my camera because I wasn’t able to focus from the tears in my eyes. Nobody sang along; nearly everyone was in tears. John Carter was genuinely moved by the thundering applause and standing ovation that lasted several minutes.

The Oak Ridge Boys followed up with “Far Side Banks of Jordan.”

There were other songs by friends and family: “Pickin Time,” “Supper Time,” “Give my love a Rose,” and “Ring of Fire.” There were a few more words from family and friends, and a lively version of “Jackson” was performed by Carlene Carter and Larry Gatlin. 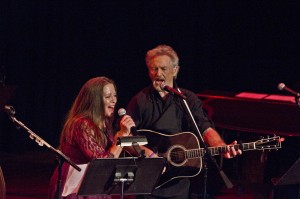 The spectacular 3 ½ hour ceremony seemed to be over in no time, and was fitting for a man who was loved by millions. It was an honor to be witness to this celebration of Johnny Cash’s legacy and commemoration of his life in an official US postage stamp. 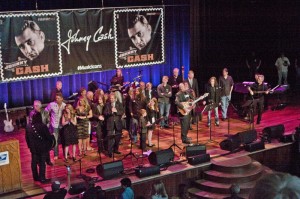