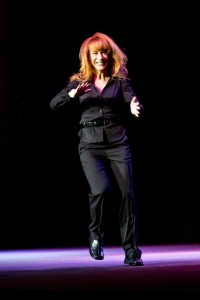 In her latest 80-city tour, “Like a Boss”, the brutally honest, always entertaining, and funny comedian, Kathy Griffin, gives us her take on Demi Lovato fans, millennials, the Kardashians, and the insane political season. Griffin is a Guinness record holder for the most TV comedy specials (20), a two-time Emmy winner for Bravo’s, “Kathy Griffin: My Life on the D-List”, and after several nominations, picked up her first Grammy for the album, “Calm Down Gurrl.” Fresh off her appearance the night before at Carnegie Hall, Onstage Magazine caught her act inside the showroom at the Horseshoe Casino in Southern Indiana.

The show opens with a video montage chronicling the highlights of Kathy’s years in the industry, and it ends with a loving and funny introduction from her mom, Maggie.She jumps on stage, red hair bouncing, full of energy, and dressed all in black to give us her take on the mundane and the bizarre.  Kathy is so rapid fire and engaged with her audience, it’s easy to understand why she’s the hardest working woman in comedy today. Her riff on her mother’s misunderstanding of a Kardashian re-run as, “Bruce going back to being Bruce” struck this writer as particularly humorous. 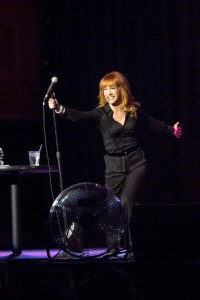 Kathy is a real person with real issues, like having red hair (trust me – it’s an issue), processing crazy, rabid tweets and death threats from the millions of followers Demi Lovato has on twitter, dealing with the responsibilities an aging parent poses (her mom, Maggie is in assisted living these days), navigating an unconventional romantic relationship (he’s much younger than her), and the challenges of holding an untraditional job, especially for a woman. She shares this with us in the most honest way possible and this writer admires her sense of humor and likes her as a person. (Sidebar: Kathy Griffin entertained and rose above the tragedy that occurred in Paris earlier that day – allowing us to laugh and smile in the midst of horrible events.)

Thanks for playing Kathy. We’ll come see you every day of the week and twice on Sundays. You’ve eclipsed Lucy as this writers favorite, funny redhead. 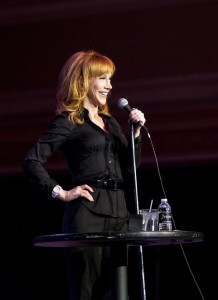 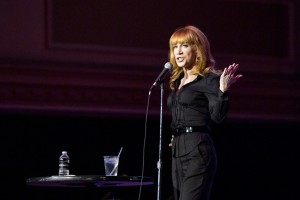