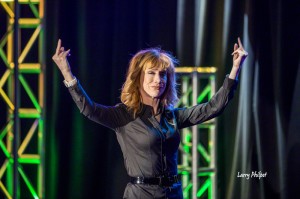 After only seven episodes, the irreverent redhead puts the E! show, Fashion Police, in her rear view mirror.  From Buzzfeed, here is her tweet:

“Let me introduce myself. Hi, my name is Kathy Griffin. I’m 54, have written and starred in 23 stand-up comedy specials, I have two EMMYS, a Grammy, a NYTimes #1 Bestseller, decades of activism for the #LGBT community, have performed for the troops in Afghanistan and Iraq, among many other things. When I chose to step into the shoes of my beloved friend Joan Rivers at Fashion Police, I was thrilled to continue her legacy as a woman being brash and eccentric on television. I am a freedom-loving female and gay rights activist who loves to find the funny in all people, attitudes, beliefs, and appearances, but only when the context permits intelligent humor. I thought that I could bring my brand of humor to Fashion Police so that beautiful people in beautiful dresses could be teased when appropriate. My brand of humor, while unrepentant and unafraid, is all about CONTEXT. There is plenty to make fun of in pop culture without bringing people’s bodies into it. Again people…context! Listen, I’m no saint — I’m a feminist AND a Gurrrrl who loves an offensive joke or a well-timed barb and you will find plenty in my repertoire. But I do not want to use my comedy to contribute to a culture of unattainable perfectionism and intolerance towards difference. I want to help women, gay kids, people of color and anyone who feels underrepresented to have a voice and a LAUGH! That has been my platform for decades and my body of work speaks for itself. After 7 epodes of Fashion Police, I discovered that my style does not fit with the creative direction of the show & now it’s time to move on. I wish E! and the E! only the best and I hope to continue to make you all laugh performing live or on television where I can be smart, irreverent, unrepentant and unafraid in an observational way that is candid, honest and justified. Thank you to my fans for taking the ride with me. See you at the gay bars…and the MF-ing KENNEDY CENTER Saturday, June 20 and everywhere else! Tickets on sale at KathyGriffin.com. How’s that for #unapologetic?”