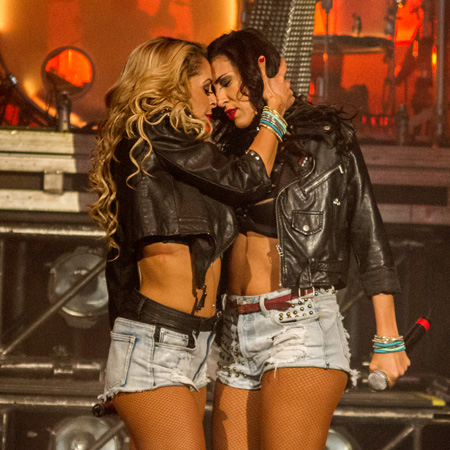 Motley Crue performed in Indianapolis on August 20, 2015 in a much hyped show, with great expectation from the audience.  Formed in 1981, they had a string of hits and embodied the rock and roll band lifestyle at the time. Founded by bassist Nikki Sixx, who seems like a good guy on his radio show, an anomaly of a drummer who is one of the few who can play a double bass kick, guitarist Mick Mars, and vocalist Vince Neil.  The band is one of the best selling bands of all time, having sold more than 100 million records worldwide.

Often noted for their hedonistic lifestyles and persona they maintained, the various members have had numerous brushes with the law, spent time in prison, suffered from addiction to drugs such as cocaine and heroin, and of course girls, girls, girls.

This should have been a great show, and while this tour is titled “All bad things must come to an end”, maybe it’s time.  This writer saw them last year, and while this year was better than last year’s performance, that’s not saying much. Like a line of ants that had found a piece of candy on the sidewalk, there was a non-stop line of people going both up and down the stairs, presumably for beer or food. This wasn’t a show where you held off on a beer run because you didn’t want to miss anything.

Is the band still relevant, when a man in his 50s sings a song of rebellion such as “Smokin’ in the Boys’ Room”, and audience participation is a give and take of “Who out here is a bad ass?”, and when the crowd’s response wasn’t loud enough, it became “Who out here is a M.F. bad ass?”  If a band wants to be rebels, Hoosiers are a tough crowd, because we’ve seen them for decades. We’ve got James Dean and a Hall of Famer living just an hour away who Fights Authority and Authority always wins.

Vince Neil was a great front man. As the story goes, Mick Mars saw him perform with Rock Candi, and said something like “I don’t care if he can sing, or if he can do anything. That’s the guy we need because of the way he handled the crowd.”

Let’s say the music is a bit dated, and that’s fine. Other artists are still touring on 50 year old songs, but this performance relied heavily on pyrotechnics, high intensity strobes and a roller coaster that carried drummer Tommy Lee out into the crowd, at some points drumming upside down.  We’d like to show you that clip, but we cannot.  Apparently, management either is out of touch, or wants you to come and see the flames rather than get a glimpse of what’s in store.

Photographers didn’t have the best vantage point, and to try to shoot the act from the soundboard at floor level, trying to get a clear shot through the waving arms and cellphones, even standing on a chair doesn’t help.

What happens when you focus a precision telephoto lens on the frontman and a blast of 4 high intensity strobes interferes with the shot?  A photo that cannot be used, and a dark spot of temporary blindness that lasted about 30 seconds, much like a flash grenade.  (See photo #1)  If you’re a fan that likes to watch a show through waving arms and phones, see photo #2.  After standing on someone’s chair, a clear shot of Neil, but it’s unremarkable, see photo #3.

I’m not a performer, but I do shoot more than a few concerts, and it seems that whoever makes the decision regarding what is covered by the photographers is either not reading the Taylor Swift news, or that Taylor’s mom has developed (no pun) the photography plan.  Were it me, and I had such a kickass visual arsenal, I would want some of that covered in order that fans knew this wasn’t your standard concert lighting.  I would think that they’d want a shot like #4, but this one was taken by the person beside me with a little point and shoot.  Read more below gallery…

There are two arguments that can be made about such elaborate use of pyrotechnics: 1. The music just isn’t there, so you have to compensate with props. See “Great White” or “Carrot Top”, or 2., your opening act is the Vanguard of showmanship, Alice Cooper. Sort of like when Little Richard was on tour, and his guitarist was Rick James. The pyrotechnics and lights were visually stunning, and made up for a lackluster performance.

Alice was fabulous as always, brought his standard, high energy act, and has the endurance and agility of a 20 year old. Is it fair to say he upstaged his headliner? I’m probably not alone with that opinion. Plus, he didn’t pick up an instrument, leaving the guitar heavy lifting to the incredible Nita Strauss. Alice hit the stage to a shower of sparks from the ceiling, and proceeded to play his classics as well.
Scorecard:
Alice: B+
Motley: C
Pyrotechnics and rollercoaster: A