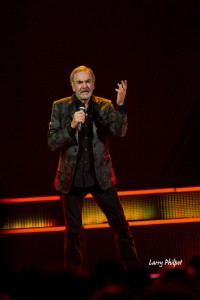 Indianapolis, April 17, 2015.  Last night’s performance before 19,000 Indianapolis fans by a legend was considered by nearly everyone to be a great show, and for the most part, this writer agrees. Known for his almost obsessive particularity about conditions and sound, for being taken seriously as a songwriter and a musician, one would expect nothing less than the concert of a lifetime. I personally witnessed a Neil Diamond concert of a lifetime, but it was about ten years ago in Columbus Ohio.  At the Columbus show, before Neil took the stage, the announcer stated that there would be no photography, that we were to not get up to use the restroom during a song, and I believe he wanted the applause held until the end of the show.

Perhaps he’s mellowed a bit in a decade, or perhaps Live Nation or Banker’s Life wouldn’t agree to these terms, and I have no knowledge if those conditions were even discussed,  but both Live Nation and the venue are the best in the business at ensuring fans have the best experience possible. I believe something was discussed because security was much tighter that at the no-holds-barred Bob Seger show two weeks before. Security were on top of anyone using a flash, which, to me is a welcome intervention, and there was none of the fans walking down to the stage to get a cellphone shot.

Last night’s concert was an elaborate production, with some of the best lighting I’ve ever seen, Diamond made a grand entrance, opening with “I’m a Believer”, to standing, cheering fans of some maturity, but there were all ages in attendance. The sound was good, the band was extremely tight, and the lighting director has to be one of the best in the business. In short, it had all of the elements of the concert of a lifetime just waiting to happen, but it didn’t.

Diamond has sold over 125 million albums, has been inducted into the Songwriter’s Hall of Fame and the Rock Hall of Fame, and deservedly so.  Being a living legend will give you a lot of leeway with a crowd, singing all the old favorites will give you high points as well, but what I thought was missing was the emotion. And singing.

Certainly, I don’t expect Neil Diamond to jump off the stage or even to run around wildly, or even to dance. But, at 74, he was lean and fit.  What I expected him to do was sing, not recite the lyrics in a speaking manner to most of his songs. To me, that was just going through the motions. I’m a Believer was written for the Monkees, and Diamond has made other artists a lot of money and brought them more success with some of Diamond’s songs than those same songs have brought to Diamond himself.  For example, Red Red Wine gave the reggae group UB40 a very good run. So good, that last night, Diamond sang that song more the style that UB40 sang it than he did in his own version. But make no mistake, Diamond is one of the best songwriters in the business, one of the best in a generation, and he is an entertainer.

I was reminded recently by a close friend about a line I’d written from the Diamond review of ten years ago, where from the 2nd row,  I’d seen pain in his face as he sang of stories that years before had broken his heart. This time, I saw none of that. Just a polished production and a songwriter relying a lot on his star power. He’s a legend and he knows it.

Brooklyn Roads had home movies that were especially touching. The narrative before, with a graphic of the Brooklyn Bridge gave way to old home movies taken by Neil’s father, and created a very moving montage before he went into that song.

If you were further back, the video screens were cinema quality,  with a view so sharp and the lighting so fantastic that you thought you were watching a documentary.

He introduced a couple of songs from his new album, I believe called “Melody Road.”  “In Better Days” was especially enjoyable, and a song that took five years to write, “The Art of Love” was just plain simple, but great. 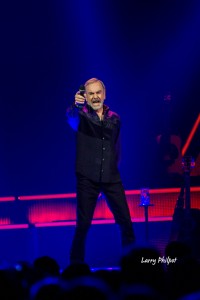 When he finally got around to “Forever in Blue Jeans,” he told the crowd that if they wanted to stand up and felt like dancing, that this is the time, and even encouraged a sing along with one number. I decided he’d loosened up and was going to let fans sing and dance a bit. I’ll give him the benefit of the doubt on that, but I have trouble getting past so much speaking and so little singing.  Maybe he can’t hit the higher notes like he once did, and that’s to be expected, and also gone was the duet he originally did with Streisand, “You Don’t Bring Me Flowers”, a part that could have been filled by either of his two female backup singers,  Maxine and Julia. For emotion, a live performance of that particular song can bring tears to your eyes.

Not as humble as 10 years ago,  and far too long into the show at about the 18th song, I felt he only connected with me when he picked up his guitar for the first time and performed Cheri, Cheri (You got to me), and while it was a long show, from that point, he appeared to begin having fun for the first time all night. From that point, and through the introduction of the band, the mood changed.  At “Holly Holy”, Neil let loose and finished with “I am, I said”, before a short break and an encore of 5 songs.  Song 24, “Brother Love’s Traveling Salvation Show” probably would have had more punch had it not been so far down on the list, and Diamond ended the night with “Heartlight”, perfect for wrapping up a two hour performance.  Overall, a good show, but a song should be sung, blue or otherwise.  Grade:  B-   (photo gallery below)