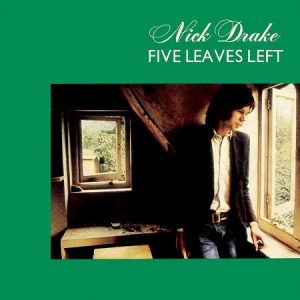 Today marks the 48th anniversary of Nick Drake’s debut album, Five Leaves Left, named after the warning found towards the end of a packet of Rizla cigarette papers. The sessions began in July 1968 at Chelsea’s Sound Techniques studios and the finished album was released a year later by Island in September of 1969. The LP featured the tracks ‘Time Has Told Me,’ ‘River Man,’ and ‘Way To Blue.’ Five years after recording the album Drake died at the age of 26. His Cause of Death was determined to be suicide from an overdose of approximately 30 amitriptyline pills, a prescribed antidepressant.

Nick Drake was too ethereal and sensitive to compete with 70s showmen like David Bowie and Elton John 48 years ago, but today, in the age of digital downloads – he’s a bright, shining, diamond waiting for new music lovers to discover. His talent was indisputable while he was alive but he was a hard artist to pin down among the glitz and excess of 70’s era rock-n- roll. He never had his “Lizard King” moment or played Woodstock, but his musical contributions have left a lasting impression. Volkswagon’s “Milky Way” Spot uses “Pink Moon” and has introduced Nick Drake to a new generation of appreciative listeners.

Drake’s lyrics were dark and full of shadowy images containing black-eyed-dogs and the River Man, but the haunting melodies, his soothing voice, and fabulous arrangements were the real hook. Mark Plummer, a reviewer for Melody Maker, spoke about Nick Drake in a May 1972 issue before Drake’s untimely death and said, “The more you listen to Drake,” “the more compelling his music becomes—but all the time it hides from you … It could be that Nick Drake does not exist at all.”

For those of us lucky enough to know of Nick Drake’s existence, he will never die. His music touches a melancholy spirit we can all relate to at one point. Gone, but not forgotten, Nick Drake is everywhere. Thanks for playing. <3