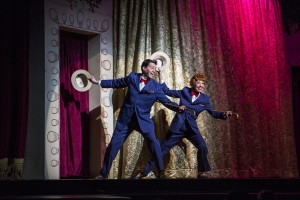 If you’ve ever been in a television audience during the taping of a show, you’ll feel right at home during this stage production. The setting is 1952, in the Desilu Playhouse, where studio audience members await the filming of two hilarious and oh-so-familiar I LOVE LUCY® episodes, “The Benefit” and “Lucy Has Her Eyes Examined.” A charming host entertains and enlightens the crowd to the behind-the-scenes filming process of a brand new thing called “television,” the Crystaltone Singers perform advertising jingles in perfect 50s style harmony and the sidesplitting antics of America’s favorite foursome – Lucy, Ricky, Fred and Ethel – are presented live on stage and in color for the very first time! It’s a one-of-a-kind theatrical experience TV Guide’s William Keck calls “the most entertaining stage production I’ve seen in years – including Broadway!”

It’s impossible to write a review of this performance without “Spoilers”, so what I will do is put up some photos and let you imagine the rest. The live commercial jingles are great entertainment in themselves, and there’s some audience participation.  Lasting right at 2 hours, this is a thoroughly entertaining production, complete with flubbed lines and laughter both on stage and off. 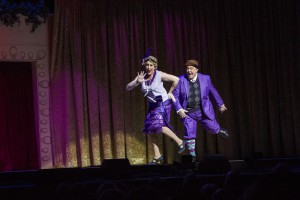 Now showing at the Murat Theater at Old National Center in Indianapolis through February 16th, this is a solid production and well worth checking out. See a few stills from the gallery below. All photos, copyright Larry Philpot 2014