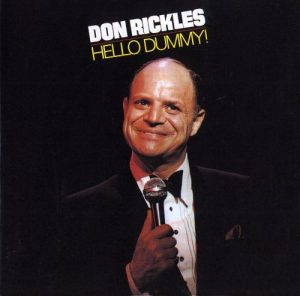 Don Rickles was an equal opportunity comic offender. He became famous for his politically incorrect jokes, and for insulting his audience. The New Yorker described him as a tough Jew in 2004, —a confronter, an imposer, and a hawk. They ruminated that he wasn’t trying to charm a hostile world, he was coming at it with a baseball bat.

Bernie Mac, a longtime fan of Rickles, recalled what a radical spectacle Rickles presented to him as a boy, when he first saw him on a Dean Martin celebrity roast:

“He was not afraid to cross the line. He attacked! He had no respect for any person, and he was doing his thing to everybody—black, white, Jewish, Asian. I fell in love with him. I saw the joke, you know? My family saw the joke. My old grandfather, who came from the South—even he got Rickles. He was like, ‘This mofo is crazy.’ “

Rickles can be credited with taking insult comedy to an unprecedented level and paving the way for comics such as Sam Kinison and Andrew Dice Clay. His act was nastier, more confrontational and rapid fire than audiences had ever seen before. His insults came with snarling admonitions declaring “Don’t be a hockey puck” and “That’s Fruity.”

Rickles escaped career ending episodes because he was never really hateful. Comic Icon Bob Newhart, one of Rickles close friends, said, “It’s like when you’re having a cocktail party at your house, and your kid comes over to say, ‘That fat lady in the red dress wants another Martini.’ Rickles is that kid. He never had that kind of honesty beaten out of him.”

We’ll close this last chapter on Don Rickles with the quote he ended his own shows with:

“I wish for you, my friends, that for years to come you have what I have—people who care.”