Rock history is filled with ghost stories. The oldest rock-n-roll haunting’s can be traced back to the blues – particularly The Delta blues –. with all its spiritualism, mysticism, and voodoo influences. The Delta blues is regarded as a variation of country blues and features a rootsy sparse style, strong rhythmic pulse, and passionate soulful vocals accompanied by slide guitar.

The story of Robert Johnson (1911 – 1938) and the Devils Crossroads originated in the Mississippi Delta.

More than one hundred years ago, a boy-child was born in Mississippi – a dirt-poor, African-American who would grow up, learn to sing and play the blues, and eventually achieve worldwide renown. Confirming almost any detail from his life is an impossible task. Except for some scratchy photographs and a handful of recordings, we know next to nothing for certain about the man.

In the decades after his death, he has become known as the King of the Delta Blues Singers, his music expanding in influence to the point that rock stars of the greatest magnitude – the Rolling Stones, Bob Dylan, Eric Clapton, the Allman Brothers – all sing his praise and have recorded his songs.

Like many blues-men of his day, Johnson plied his craft on street corners and in jook joints, ever rambling and ever lonely – and writing songs that romanticized that existence. But Johnson accomplished this with such an unprecedented intensity, marrying his starkly expressive vocals with an unprecedented guitar mastery that he was said to have made a deal with the Devil while standing at the crossroads. The crossroads of US 61 and US 49 in Clarksdale is where Wikipedia will tell you this piece of music history is located and where many people believe the blues guitar legend made his deal with the Devil, however, Clarksdale blues men and just plain folks from the area are still trying to find where those crossroads might have been. 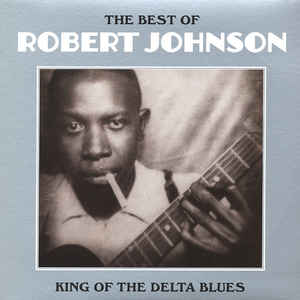 The Cliff-Notes version of this ghost story goes like this: Robert Johnson wanted to play the blues, but he wasn’t any good. He was so bad in fact, that everyone who heard him told him so. He disappeared for a little while, and when he returned, he was different. His musical abilities were astonishing,  almost supernatural –and musicians who’d mocked him previously, now wanted to his know his secret. According to the now-famous legend, Johnson had a simple answer: he went out to the crossroads just before midnight, and when the devil offered to tune his guitar in exchange for his soul, he took the deal.

This is the full ghost story from hauntedamericatours.com:

Meeting with the Devil at the Crossroads

A “vision”, as told by Henry Goodman

Robert Johnson been playing down in Yazoo City and over at Beulah trying to get back up to Helena, ride left him out on a road next to the levee, walking up the highway, guitar in his hand propped up on his shoulder. October cool night, full moon filling up the dark sky, Robert Johnson thinking about Son House preaching to him, “Put that guitar down, boy, you drivin’ people nuts.” Robert Johnson needing as always a woman and some whiskey. Big trees all around, dark and lonesome road, a crazed, poisoned dog howling and moaning in a ditch alongside the road sending electrified chills up and down Robert Johnson’s spine, coming up on a crossroads just south of Rosedale. Robert Johnson, feeling bad and lonesome, knows people up the highway in Gunnison. Can get a drink of whiskey and more up there. Man sitting off to the side of the road on a log at the crossroads says, “You’re late, Robert Johnson.” Robert Johnson drops to his knees and says, “Maybe not.”

The man stands up, tall, barrel-chested, and black as the forever-closed eyes of Robert Johnson’s stillborn baby, and walks out to the middle of the crossroads where Robert Johnson kneels. He says, “Stand up, Robert Johnson. You want to throw that guitar over there in that ditch with that hairless dog and go on back up to Robinsonville and play the harp with Willie Brown and Son, because you just another guitar player like all the rest, or you want to play that guitar like nobody ever played it before? Make a sound nobody ever heard before? You want to be the King of the Delta Blues and have all the whiskey and women you want?”

“That’s a lot of whiskey and women, Devil-Man.”

“I know you, Robert Johnson,” says the man.

Robert Johnson, feels the moonlight bearing down on his head and the back of his neck as the moon seems to be growing bigger and bigger and brighter and brighter. He feels it like the heat of the noonday sun bearing down, and the howling and moaning of the dog in the ditch penetrates his soul, coming up through his feet and the tips of his fingers through his legs and arms, settling in that big empty place beneath his breastbone causing him to shake and shudder like a man with the palsy. Robert Johnson says, “That dog gone mad.”

The man laughs. “That hound belong to me. He ain’t mad, he’s got the Blues. I got his soul in my hand.”

The dog lets out a low, long soulful moan, a howling like never heard before, rhythmic, syncopated grunts, yelps, and barks, seizing Robert Johnson like a Grand Mal, and causing the strings on his guitar to vibrate, hum, and sing with a sound dark and blue, beautiful, soulful chords and notes possessing Robert Johnson, taking him over, spinning him around, losing him inside of his own self, wasting him, lifting him up into the sky. Robert Johnson looks over in the ditch and sees the eyes of the dog reflecting the bright moonlight or, more likely so it seems to Robert Johnson, glowing on their own, a deep violet penetrating glow, and Robert Johnson knows and feels that he is staring into the eyes of a Hellhound as his body shudders from head to toe.

The man says, “The dog ain’t for sale, Robert Johnson, but the sound can be yours. That’s the sound of the Delta Blues.”

“I got to have that sound, Devil-Man. That sound is mine. Where do I sign?”

The man says, “You ain’t got a pencil, Robert Johnson. Your word is good enough. All you got to do is keep walking north. But you better be prepared. There are consequences.”

“You know where you are, Robert Johnson? You are standing in the middle of the crossroads. At midnight, that full moon is right over your head. You take one more step, you’ll be in Rosedale. You take this road to the east, you’ll get back over to Highway 61 in Cleveland, or you can turn around and go back down to Beulah or just go to the west and sit up on the levee and look at the River. But if you take one more step in the direction you’re headed, you going to be in Rosedale at midnight under this full October moon, and you are going to have the Blues like never known to this world. My left hand will be forever wrapped around your soul, and your music will possess all who hear it. That’s what’s going to happen. That’s what you better be prepared for. Your soul will belong to me. This is not just any crossroads. I put this “X” here for a reason, and I been waiting on you.”

Robert Johnson rolls his head around, his eyes upwards in their sockets to stare at the blinding light of the moon which has now completely filled tie pitch-black Delta night, piercing his right eye like a bolt of lightning as the midnight hour hits. He looks the big man squarely in the eyes and says, “Step back, Devil-Man, I’m going to Rosedale. I am the Blues.”

The man moves to one side and says, “Go on, Robert Johnson. You the King of the Delta Blues. Go on home to Rosedale. And when you get on up in town, you get you a plate of hot tamales because you going to be needing something on your stomach where you’re headed.”