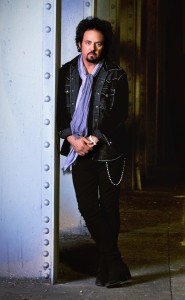 Los Angeles — Steve Lukather will stay on the road following Toto’s European run of headline arena dates and festival appearances.  He’ll join the Frampton Guitar Circus Tour for seven dates, four of which feature his ensemble opening the show.  Luke shares, “I am so excited to join my lifetime friend Peter Frampton for his ‘Guitar Circus’ this summer.  I am a huge fan from the old Humble Pie days thru all his solo work through the years.  We have been friends since 1978 when Toto opened its first ever arena show, on our first tour in Hawaii in ’78 on the Frampton Comes Alive tour the first time around.  Our son’s Trev and Julian are close friends, and I consider Peter family.  He is one of the finest guitar players and artists out there.  He has inspired me as a player over the years with his melodic and original sound and feel, and GREAT songs. He is the REAL deal.  We have had so much fun jamming over the years, I was honored and happy to get the call to join him on some select dates in the USA between Toto’s 35th Anniversary World Tour. We are gonna have a blast. Cant’ wait.”

In the midst of these appearances, Luke will stage a headline show at the House of Blues in Dallas in the Cambridge Room on July 17.  He offers, “Coming off a very successful European tour with packed houses and a new record and we are ready!”  On January 22, 2013 Steve Lukather’s Transition (Mascot) was released, receiving raves from critics across the Globe.  This week, in a “Mid-Year Best Of 2013” Something Else Reviews’ Nick DeRiso placed the album at #2 publishing, “A sense of perseverance feels like the broader message of Transition, something embedded in its very title. Having established himself apart from the legendary band he co-founded, and all of the many sideman gigs that helped bolster his career, Lukather seems ready finally to write with the same revelatory honesty that has always marked his guitar playing. The results are a triumph — over adversity, over expectations, over time. Steve Lukather may have just made his best record ever.”

Since the release of his last solo album All’s Well That Ends Well, Lukather has been a busy man.  Enjoying current tenure in Ringo Starr’s touring band and G3 with Joe Satriani and Steve Vai, alongside the worldwide 35th Anniversary World Tour for Toto which hits North America this Summer, the new album finds Lukather delivering that perfect balance of style, power and imagination as he takes risks and challenges himself as he has for  nearly four decades, as his career has gone from the studios of Los Angeles to the world’s biggest concert halls.  He recently revealed, “I’ve got a lot to be thankful for, and now is a perfect time for me to take stock of that, which is part of what Transition is about…I equate recordings to paintings and I wanted to make Transition a big, beautiful album with lots of fine details and shadings and colors. That’s what I do and what my favorite albums — Sgt. Pepper’s, Dark Side of the Moon, Electric Ladyland,Goodbye Yellow Brick Road — are all about. So if it’s a sin to make massive sounding records with huge production values, then I’m going to Hell.”

A five-time Grammy Winner and member of the Musicians Hall of Fame, Lukather has worked with an A-list of fellow guitar giants: Eddie Van Halen, Robben Ford, Lee Ritenour, Larry Carlton, Slash, Zakk Wylde, Jeff Beck, Eric Clapton, Carlos Santana, and Joe Bonamassa among them. He’s also co-led Toto with fellow founder David Paich through every twist of the band’s platinum lined history while playing on albums by Michael Jackson, Warren Zevon, Aretha Franklin, Stevie Nicks, Don Henley, Miles Davis, Roger Waters, Cheap Trick and other rock and pop royalty. And he’s done all that while writing hits for the Tubes and George Benson, plus maintaining a parallel solo career of his own that began with his 1988 solo debut Lukather.

Luke will appear on the following Frampton Guitar Circus :