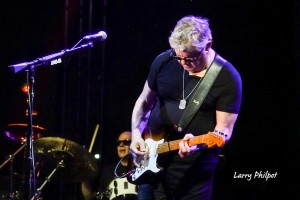 As my first thought, permit me to write that Hoosier Park Racing and Casino is a fantastic place to see a show, extremely well run,with some big acts in more of an intimate setting. Last night’s performance of the Steve Miller Band had all the pieces in place for a fabulous show, and while Mr. Miller took the audience through the 70s with some little anecdotes and some great performances of many of his biggest hits, it seemed to this writer that he was there to work and get the hell out of Dodge. In fact, it is safe to say that within one minute of leaving the stage, the band boarded the bus and it was headed to the gate. Oh…….. take the money and run.

Miller’s godfather was the legendary Les Paul, and this writer has heard that Mr. Paul was his first guitar instructor. Given that, you should expect to be a rock star, not a “whining diva”. Steve is still pissed off from the Rock Hall of Fame induction, and he has a good point. And he’s welcome to use the bully pulpit to tell his story to expose the bullshit organization that is the Rock Hall, he repeatedly referred to the audience as melancholy, and felt they weren’t ready to rock or have a good time. In psychology, they call this projection. I’ve seen and photographed  thousands of musicians, and this is what I’ve learned: You get what you give. A musician feeds off the audience and gives even more, creating an unforgettable experience for everyone. 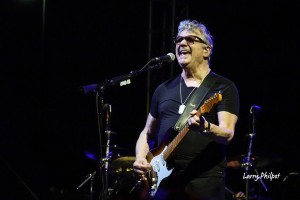 In truth, it was a perfunctory performance and Miller could have just phoned it in. This writer saw the clip of the induction, saw the clip of the backstage rant about the Rock Hall “honoring” Miller and giving him a seat for him and his wife, but wanting $10,000 a seat for his band members, and it’s always been the Steve Miller Band. In this writer’s opinion, Miller exposed the typical “foundation” mentality where, like the Red Cross and many other charities and foundations, they seem to exist almost solely to raise money for the executives. The Red Cross will have a blood drive and throw away the blood, mainly so they can stay in the public eye. There’s the popular and recent story of the Foundation set up by “Sting” (Of the Police) was reported to only be giving 1% of the money to their cause, and after this was exposed, they improved “by leaps and bounds” (their words) to a whopping 1.2%. Oh irony, where is thy Sting?

Agreed, the Rock Hall (in Cleveland), run by people in NY needs a complete shakeup, but especially surprising was a statement by the Patrick and Dan (The Black Keys), that they regretted introducing Miller. At first, I thought this was a kiss ass move by the Black Keys, and really thought they should have kept their mouths shut, but it’s clear now to this writer why they had regrets: they actually met Steve Miller. See Miller’s backstage rant at the Rock Hall, included. Note that all photographs are registered copyrights of Larry Philpot and may not be reused without express permission. For larger versions, please click on any photo, below: