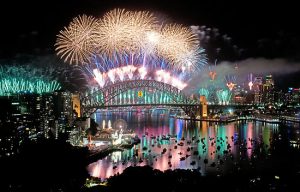 It’s a new year in Australia, and Sydney celebrated with the biggest firework display the city has ever seen. This year the theme included honouring Prince, Gene Wilder, and David Bowie.

Co-producer Catherine Flanagan revealed that they saw saw this year’s display as an opportunity to reflect and said, ‘This year, sadly, we saw the loss of many music and entertainment legends around the world. So celebrating their music as part of Sydney New Year’s Eve fireworks display is an opportunity to reflect on the year that has been and what the future may hold.”

The 12-minute show featured over 132 tons (of fireworks and it is thought that there was a live audience of 1.5 million people.

Check it out here: