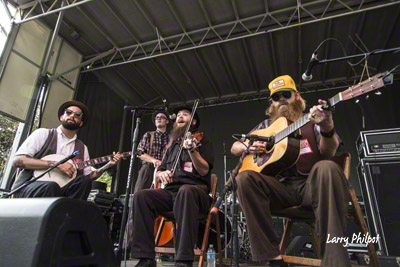 After the rain fiasco the night before, Indianapolis was not sure how WARMfest would proceed. Sure, the skies seemed clearer and rain less likely than on Saturday, but would people still show up? As it turns out, the answer to that question was a resounding yes. Perhaps it was because Saturday tickets were valid for the Sunday and Monday dates, but only a few short hours after the gates opened, Broad Ripple Park once again felt full.

During the initial part of the day, few of the acts playing had any national recognition. However, this does not mean the early hours are devoid of talent; if anything, festivalgoers saw it as an opportunity to get acquainted with some new music. One act in particular, the Max Allen Band, captured the audience’s attention and hearts. Switching effortlessly between Mayer-esque blues and gritty rock, the Max Allen Band perfectly incorporates elements from two different genres to create something larger than the sum of its parts. Best of all, their entire set was saturated with dirty basslines and orchestrated guitar parts, which occasionally give the impression of video game boss fight music.

The next standout act, Brandon Whyde & the Devil’s Keep, took the tiny stage in the Otter tent around 12:45. Few people in the audience were expecting the intimate performance Whyde and his cohorts would put on, but as soon as the 50’s blues vibe and Whyde’s snarly, breaking voice begin, the audience had no trouble enjoying the stellar tunes. Whyde, who has two solo albums thus far, was playing for the first time with the rest of the Devil’s Keep, though the tightness and communication between the players was already highly developed. The audience ate up every song that Whyde through out (including the Temptations’ “My Girl”). Thus far, Whyde has also been the only act at WARMfest to give an encore. On Stage got a unique opportunity to sit down with Whyde after his set, so readers and fans of Whyde’s music ought to be on the lookout for the interview in the next few days. 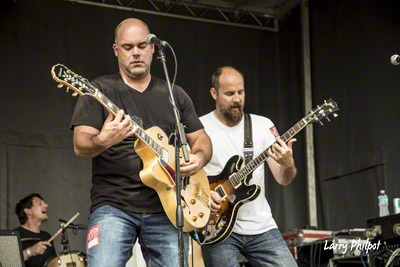 Around 5:45, a new sound reverberated throughout the park. The festival so far had been pretty rock and blues heavy, but somehow, somewhere, a lone synth note was heard. Soon accompanied by stellar vocals and a danceable drum and bass groove, the festival collectively turned its eye towards the Hawk Stage, where Nashville natives Machines are People Too were rocking their set. The band is often classified as synth-pop, which is a slightly confusing label. However, seeing as the band typically plays three synths but imbues them with pop sensibilities, it does not seem fitting to call them by any other label. Working their way through a “What is Love?” cover and quite a few upbeat original tunes, Machines are People Too managed to engage the audience with their memorable hooks. Their set ended with a new single, “Be What You Love”, but one can be sure that Machines are People Too made more than one new fan that day. 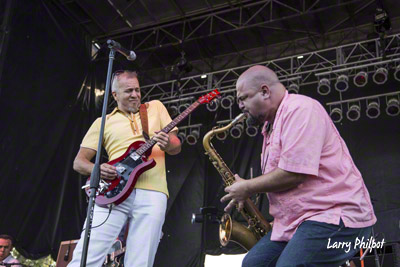 Finally, the big moment arrived, when headliner Big Head Todd and the Monsters took the stage. Impressively, the group has been performing since 1986, though soon after their set began it became obvious why the group has so much staying power. Frontman Todd Park Mohr has a unique voice that the audience will not be forgetting soon, but what really sells Big Head Todd and the Monsters is their attitude on stage. The group is fun, confident, and just the slightest bit provocative, a mixture audiences tend to consume as fast as they can. The groups last release celebrates the life and work of legendary blues guitarist Robert Johnson, whose influence can quite clearly be heard in Big Head Todd and the Monster’s music.

There’s only one day left of WARMfest, but it promises to be a good one: Trombone Shorty, Staying for the Weekend, Michael Franti, and so many other bands are set to finish off this labor day weekend in style. Be looking for the upcoming interviews and a final review of the inaugural WARMfest. ‘Till next time!