Chuck Barris, the producer and host of The Gong Show took his final curtain call this week. 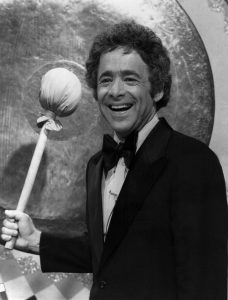 Chuck Barris was born on June 3, 1929, in Philadelphia. Having previously worked as an assistant to Dick Clark, Barris borrowed $20,000 from his stepfather to develop The Dating Game and sold the pilot to ABC. The show became an instant hit. Barris often provided conflicting details about his family life and his early years are somewhat shrouded in mystery.

In many ways, Barris was one of the men responsible for starting the trend towards `reality television’ that dominates television programming today. His most famous shows (especially `The Gong Show’) were all based on the premise that millions of Americans would be willing to humiliate themselves in public for a few moments of fleeting fame – and that millions more would tune in to bear witness to the spectacle. The Gong Show was an amateur talent contest franchised by Sony Pictures Television and ran on NBC from 1977 to 1980 in syndication. The show is best remembered for its absurdist and outlandish humor. It awarded participants ridiculous, worthless prizes, used a stable of B-list stars, and introduced the world to “talents” like the “Unknown Comic and Gene, Gene the Dancing Machine.”

Television made him famous, but he confessed in his memoir, “Confessions of a Dangerous Mind”that his  biggest hits happened off screen. By day, Chuck Barris was a host and producer of some of the cheesiest games shows on television, and by night,  a CIA assassin. In his book, Barris claimed to have been a CIA assassin in the 1960s and 1970s, assertions that the CIA itself has refuted and which various media entities have implied should be taken with a grain of salt. .

Was Barris, craving fame himself,  simply savvy enough to plug into the national mood? Or did he manage to make himself a fortune and turn himself into a household name in the process. The $100,000 question becomes, of course, is Barris’s story even remotely true, or is it merely another case of this master showman’s playing the public for all its worth? We’ll never know.

We offer his family, friends and fans our sincere condolences.

Even Alice Cooper wound up on The Gong Show. Alice launched a new video series in 2016; From The Inside, where he takes a look back at some of the key moments of his career and his Gong Show appearance was one.