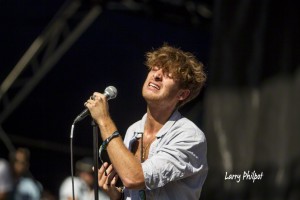 I was a fan of Paolo Nutini before I saw him perform live at Austin City Limits, yesterday for weekend one, but watching him give it up to a huge, jubilant crowd under the bright October sun on the Texas beltway propelled me to Super Fan. In every song, and every lyric, you can feel Paolo’s emotion, and dedication. You don’t emote like Paolo if you haven’t lived these lyrics.

Produced with Dani Castelar, his new album Caustic Love, is the powerful and dynamic third release from the 27 year old Scottish singer-songwriter. This is definitely Paolo Nutini’s best work, and has the potential to go down as one of the best alternative/indie albums of the decade. Paolo is growing up and taking the reigns – proving he’s a confident, competent, brilliant, and beautiful artist.  Nothing is withheld from the audience. His raw emotions, poetry, politics, hopes, wishes, dreams, and heartbreaks are on display for fans and audiences around the world to experience.

There is a striking and almost haunting similarity to Rod Stewart when one listens to Paolo. A smoky, sexy voice, laced with heartache, anger, and ultimately hope gets me every time, and Paolo certainly understands the effect his music has on the audience. You, music lover and review reader, should get it too. If you crave soulful, heartfelt lyrics, a killer voice, and good-looks to boot – Paolo Nutini can pull on your heartstrings time after time. I encourage you to check out Paolo Nutini live in concert, if you have a chance. There’s a rumor that he’ll be doing a couple of videos with acoustic versions of songs from Caustic Love between ACL weekends.

This writer has been listening to his latest album, Caustic Love at least once a day for weeks. over and over. My favorite track, “Cherry Blossom”, is airy and ethereal, and Paolo nailed it at ACL. The crowd bounced along while Paolo sang about being a man to lean on. The dark and philosophical “Iron Sky”, was another crowd pleaser for ACL festival goers. Everyone walked away from the Samsung Galaxy Stage blown-away by Paolo Nutini’s performance.  I’ll see Paolo Nutini again, and again, and again – at an indoor venue, an outdoor festival, or in a back alley – every chance I get. Yes, he’s because he’s just THAT GOOD!

P.S. A very heartfelt Thank You to the event organizers and staff at ACL. The hospitality was the size of Texas.