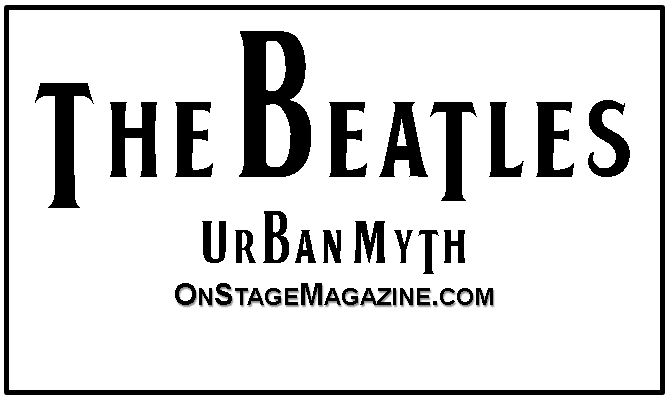 “Paul is Dead” is an urban legend and conspiracy theory alleging that Beatles member, Paul McCartney died in 1966 and was secretly replaced by a look-alike.

On Wednesday, November 9th, 1966, after working at Apple studios through the night, Paul McCartney was killed driving his Aston-Martin through town at five o’clock in the morning. He was staring at a meter maid named Rita and didn’t realize that he was coming up to a red light. Paul died of massive head trauma suffered in the crash. The Beatles later held a Paul look-alike contest to replace him. The winner was named William Campbell, a dead ringer for Paul, except for a scar on his upper lip.

The conspiracy theories surrounding Paul McCartney’s death, started October 12th, 1969 when a caller to Detroit radio station, WKNR-FM told disc jockey Russ Gibb about the rumor.  Gibb obtained a list of clues from a satirical review of Abbey Road by University of Michigan student Fred LaBour under the headline “McCartney Dead; New Evidence Brought to Light”. In the spirit of “shock-jockdom” and self-promotion, Gibb went on to reveal the connections on air. These conspiratorial revelations lead to a moment of mass hysteria from Beatles fans across the globe and sealed the deal for this myth. 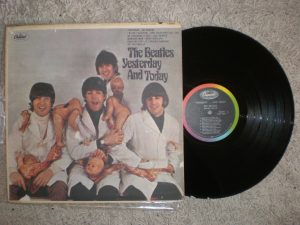 Many conspirators believe the first clues of “Paul’s Death” can be found in 1966 on “The Beatles ‘Yesterday’…and Today,” album. This album had two covers, the first being the infamous “butcher cover.” In it, the group has lab coats on, and they are holding dismembered dolls. There is a set of teeth on Paul’s right arm, perhaps signifying his teeth were knocked out in the car crash, thereby rendering dental records useless for identifying the body. George is holding a doll’s head next to Paul’s head indicating that Paul was decapitated in the accident. The revised cover had Paul in a box with the other three surrounding it. Turn the album on its side, and the box looked like a coffin. Capitol Records initially ordered plant managers to destroy the covers, and the Jacksonville plant delivered most of its copies to a landfill. However, faced with so many jackets already printed, Capitol decided instead to paste the revised cover over the old ones.

The album had a couple of songs with lyrics that pointed to death.

“I believe in yesterday…suddenly, I’m not half the man I used to be, there’s a shadow hanging over me.”.

A reference to a burial is in the song “And Your Bird Can Sing: “you can’t see me…you can’t hear me.”

“I am the Walrus”; Paul is dressed in white signifying the Walrus. In Nordic-Viking culture, the Walrus is a symbol for death.

Sgt. Pepper’s Lonely Hearts Club Band is the album most closely related to Paul’s Death and is riddled with “Paul Is Dead” connections. Several songs have references to a tragic accident and the lyrics seem to reveal information about the urban legend.

Paul’s idea for the Beatles was to immerse themselves in another identity for the 1967 release. The name “Sgt. Pepper’s Lonely Hearts Club Band” was a play on verbose hippie era band names, such as “Dr. West’s Medicine Show and Junk Band.” The cover photo shows the Beatles assuming this new identity and laying the Fab Four to rest. Conspiracy theorists looking for clues of Paul’s death interpreted the cover of Sgt. Pepper as representing Paul’s burial and the end of the Beatles. The wax images of the younger Beatles look mournfully on the gravesite because the Beatles were no longer the same band.

On the back cover of the Sgt. Pepper’s album, three members are facing forward, and Paul’s back is facing the camera. George Harrison is pointing at the first line of the song “She’s Leaving Home.”

The title song introduces Billy Shears, who tells the audience, “Lend me your ears, and I’ll sing you a song/And I’ll try not to sing out of key.” The connection: Paul’s replacement, William Campbell (Billy Shears) was still working on perfecting his singing voice.

“A Day in the Life” plays a significant role in the conspiracy. John Lennon writes, “He blew his mind out in a car” which many believe is referring to Paul. Also, when played backward, a section of the song says, “Paul is a dead man, miss him miss him miss him.”

“Good Morning, Good Morning” opens with the line “Nothing to do to save his life call his wife in.” One story of Paul’s fatal accident was that he had picked up a woman named Rita and when she realized who the driver was, she threw herself on him, causing the accident. As told in the song “Lovely Rita,” “I took her home/I nearly made it.”

“She’s Leaving Home” hides a clue for conspirators in its lyrics. The first line “Wednesday morning at five o’clock as the day begins,” is suggestive because Paul’s alleged death occurred on Wednesday, November 11th at 5 am.

One of the best known “Paul is Dead” audio clues comes at the end of “Strawberry Fields Forever.” As the song is fading out for the second time, John apparently says “I buried Paul.”  This is more apparent when the record is played at 45 rpm. John’s voice sounds as if it has been slowed down. In reality, John was saying “cranberry sauce,” which is much more apparent on the “take 7 and edit piece” version of the song that appeared on Anthology II.  Paul explained, “That’s John’s humor. John would say something totally out of sync, like ‘cranberry sauce.’ If you don’t realize that John’s apt to say something like ‘cranberry sauce’ when he feels like it, then you start to hear a funny little word there, and you think, aha!”

Then there’s the whole business about the word “Beatles” on the cover of Magical Mystery Tour revealing a secret phone number. As Rolling Stone pointed out, it’s not exactly clear what that phone number is supposed to be. It could be “231-7438, 834-7135, 536-0195, 510-6643, 546-3663, 624-7125, no telling what city, maybe London.”   If you turn the album cover upside down and hold it in front of a mirror, you can see the numbers 8341735, which is a stretch because the three, the seven and the five (could it be a two?) are backward. If you simply hold the album cover upside-down, the numbers could be 5371438. And what about the area code? Adding on to the urban myth is this; supposedly when a person dialed this number they would receive information about Paul’s death, or the person would be able to take a trip to “Magical Beatle Mystery Island”—or perhaps even speak to Paul in the hereafter. Stories abounded about the strange responses that callers received from the party on the other end of the line. According to Philip Norman in, “Shout! The Beatles in Their Generation”, this phone number belonged to a journalist for The Guardian who was nearly driven crazy by the numerous phone calls from people hoping to connect with the late Paul McCartney.

The cover photo of Abbey Road is what kept the “Paul is dead” rumor alive, as it is said to be a funeral procession. Leading the procession is John wearing white, symbolizing the clergy. Ringo, dressed in black, is the undertaker. Paul, the corpse, is out of step with the other Beatles. He is barefoot, and closing his eyes. George, dressed in work clothes, is the gravedigger. Also, Paul is smoking a cigarette, also known as a “coffin nail.” He is holding the cigarette in his right hand, even though the real Paul McCartney was left handed.

The Beatles themselves made very few comments to the press regarding the “Paul Is Dead” rumors; however, some documentation of their thoughts is available. 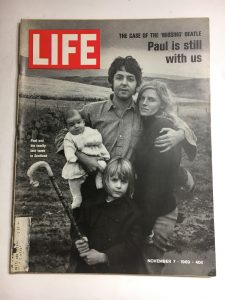 Life Magazine published an article on the “Paul Is Dead” hoax in 1969. The article contained the now famous clues, select album cover photos, and Paul’s own brief comments on the death rumors. Life magazine’s London correspondent waded through a Scotland bog to find Paul and Linda at their secluded farm, hoping to be granted a photo or a brief interview.

According to the Beatles online database of interviews (“The Beatles interviews,” 1997), Paul’s reaction to the rumors of his death was, “Do I look dead? I am fit as a fiddle. I am alive and well and concerned about the rumors of my death. But if I were dead, I would be the last to know.”

In the following years, the Beatles made occasional references to the “Paul is dead” rumor but followed the pattern of denial. One interesting comment made by John Lennon was that it is, “an interesting plug for Abbey Road.” On his solo album Imagine, John included “How Do You Sleep?” a mean-spirited song attacking Paul. Among other put-downs, John exclaimed, “Those freaks was right when they said you was dead.”

Paul answered “How Do You Sleep?” with “Silly Love Songs” when he sang, “You think that people would have had enough of silly love songs/But I look around me and I see it isn’t so/Some people want to fill the world with silly love songs/And what’s wrong with that? I’d like to know.”

The cover of McCartney’s album Paul Is Live shows him with his dog on the famous Abbey Road crosswalk—hardly a funeral procession. In the background of the album cover photo is a Volkswagen Beetle with the license plate reading “51 IS”. Rather than being dead in his twenties, Paul was still alive and making music at age 51. 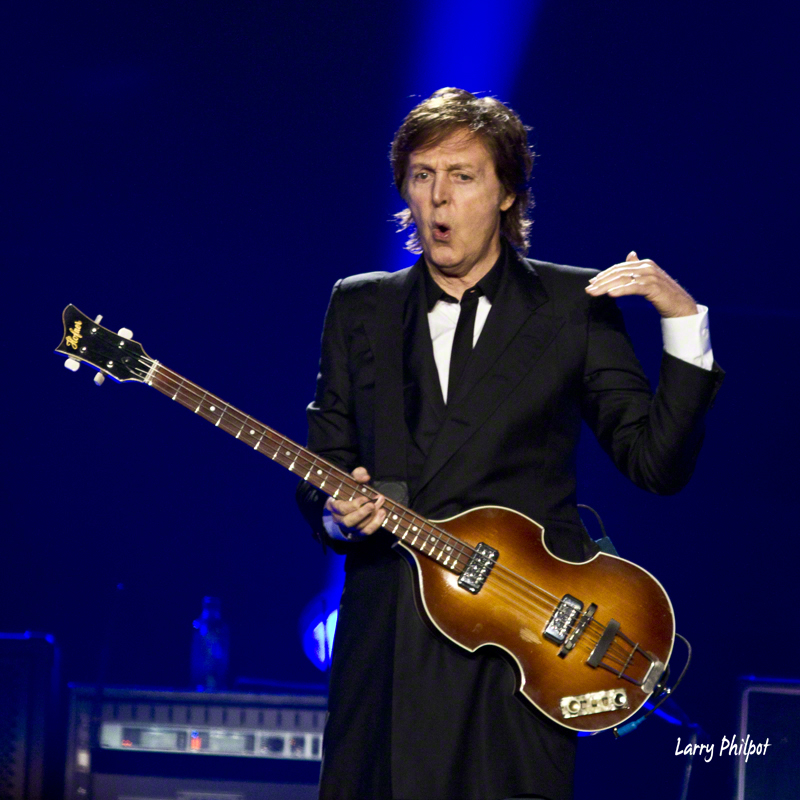