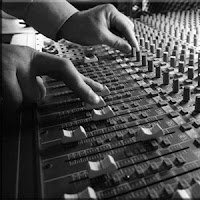 Reader Hector Gutierrez wrote in with a couple of questions that I’m happy to answer. Here we go:

How do you become a producer?

1) You’re a producer when you have a client that trusts you with their music. They have to feel comfortable with you personally first and foremost, but they also need to know that you’ll help them make the right decisions. Work with as many artists as you can in as many different genres that you can so you can have a portfolio of projects that you can play for someone.

Here’s a short excerpt from The Music Producer’s Handbook:

“I don’t remember who said it, but the following phrase is really true. “How do you know when you are a producer? When you have a client!”, meaning that as long as someone believes you can do it, then you’ve joined the production ranks. And while becoming a producer can sometimes follow an improbable path, usually there are two career tracks that take you there: being either a musician or engineer.

The time-honored way to break into production is to discover a young artist looking for a break. If you’ve been coming up through the ranks by working in the various capacities above, you can probably ask for a favor for some musical, arranging and studio help to get a short project recorded. Or, you can pay for it out of your own pocket. Either way, you can be on your way at that point, or not.

An artist or band member that meets with some music business success usually has a pretty good head start into the production world by virtue of that success. If you find an artist that you want to produce, a record label is usually inclined to let you do it, figuring that your success might rub off on the new artist. Sometimes they’ll let you do it just to keep you happy.

Success on any level tends to rub off on you and makes it easier to find a project to produce. A songwriter, musician, engineer, or others in the business are much more likely to be referred to production work only by virtue of the fact that they were connected to a hit (the bigger the hit, the easier it becomes). It’s a sad fact that it happens this way, and it sometimes bestows undeserved opportunities to the undeserving, but that’s the way the business works.”

You can read additional excerpts from the book at bobbyowsinski.com.
How does a producer get paid in these days of low sales?
2) It used to be that a producer would get paid completely from about a 3 percent royalty or so that the artist would come out of the artist’s royalty. Most producers still get that, but unfortunately there’s not much coming in from royalties these days since the sales are so low so many producers are asking for a piece of the publishing or management of the artist. Neither is easy to get as artists are rightfully leery about giving up any publishing rights, but it’s possible if you have a track record. Other producers now work for a flat fee up front, sometimes per project, sometimes per song.
My advice to a young producer starting out:  Work for free until you get your chops up and have something to play for artists, then do whatever you can to find an artist that believes in you as much as you believe in him or her.