Hearing Boy From The Crowd for the first time is like watching primordial ooze spewing up from the depths of the earth. You’re not sure what it could be, but it’s fascinating and terrifying, and demands to be heard.

Not bad for two guys from London. 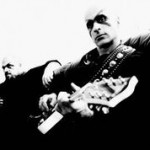 Boy From The Crowd is Vinny Piana (Songwriter,Vocals, Guitars, Bass, Keys) and Vegas Ivy (Drums and Percussion) and together they have created a massive sounding in-your-face brand of punk-blues where rock influences are perched precariously overhead, just waiting for the right lick to bring them crashing down.

Let’s talk a little about Where The Bees Come To Die, their new five song EP. The opening song “Revelator” is what you might get from an American garage band, if that band was born in a dank British basement and old time blues met up with a little Clash sounding punk. Hard and edgy and raw.

“All I Need” opens with a little homage to Jimi Hendrix, you can almost hear “Foxy Lady” as the guitar wails, but any further resemblance disintegrates as Piana’s voice turns to gravel and he spits out a tale of elusive love. It reeks of desperation and hunger.

“The Road” leads you one way then another. A blues undertone falls into place when the path turns a little more rock. Some really nice guitar work throughout, with a really sweet solo thrown in.

“All I Need” is revisited as a single edit. It’s less abrasive than the full length version which will still have you wiping the grit off your face. Adding another original song might have been more fulfilling at this point in the EP.

The title track, “Where The Bees Come To Die” ends off the release. The instrumental has a nice blues intro that soon collides with some psycho sci-fi influence bringing it up to the sky only to drop you down into the blues once again. Then repeat. Not quite sure what it has to do with bees, but it’s killer.

Overall, there’s some interesting stuff on the EP. Experimental at times, angry, rough, ballsy and full of attitude. The guitar work is pretty wild sometimes, but well done and well representing the influences. The drumming fills in all the empty spaces so it surrounds rather than plays at you. The music is young and alive, no matter what the bees think.