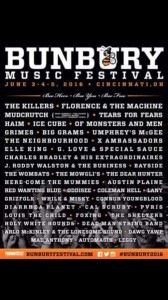 Bunbury Music Festival celebrates its fifth year in 2016 and will transform the banks of the Ohio River into a vibrant music festival experience. PromoWest Productions’ Scott Stienecker, festival owner, says, “We are very excited to host the festival again this year. This lineup is the best yet! We are also looking forward to implementing the latest fest technology with RFID wristbands which should alleviate any challenges that we came across in 2015.”

Tickets are on sale now at Ticketmaster.com. For ticket information and pricing visit BunburyFestival.com/tickets.

VIP tickets include an exclusive viewing area at both main stages, access to an air-conditioned hospitality tent with private bar and restrooms, complimentary food and more. New to the festival this year is the Ultimate VIP package, which includes a side stage viewing platform for both main stages for most performances.

BEE a Vendor:
Applications are being accepted for local and regional vendors. The festival offers a vast array of options for vendors including tents and booth space in front of 20,000 to 30,000 people daily plus receiving additional awareness through the Bunbury website and other promotional activities. Vendor applications and more information are available at bunburyfestival.com/participate/vendors.

BEE a Volunteer:
Applications are being accepted for volunteer positions. There is no application fee, multiple shifts are offered (morning, afternoon, evening) and opportunities include beverage sales, box office/gates, bullpen, clean team, greeters, information/lost and found, volunteer headquarters and team leaders. Regardless of when and where volunteers work, their role is critical to the success of the festival. Not all applicants are guaranteed selection. Applications and more information are available at bunburyfestival.com/participate/volunteersopen.
BEE a Sponsor:
Activation space and sponsorship packages are still available. Please contact Becky Long at Becky@promowestlive.com.