How Do You Get To Carnegie Hall? 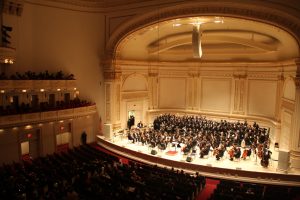 There are a few global destinations with jokes associated with them, but Carnegie Hall is one the most famous. A pedestrian on 57th Street sees a musician getting out of a cab and asks, “How do you get to Carnegie Hall?” Without pause, the artist should reply, “Practice, practice, practice.”

Carnegie Hall opened in 1891. The origins of this joke are not in its archives. The Friars Club doesn’t know, either. The line has been ascribed to a nameless musician on the street, sometimes to the violinist Jascha Heifetz, and sometimes to the pianist Artur Rubinstein. While vaudeville is a likely guess, the joke doesn’t seem to have surfaced in print until the 1950s. Bennett Cerf had a version in his humor column in 1955; so did The Washington Post. Bennett Cerf helped to shape the American publishing business into what it is today. A writer and television personality, Cerf was also an active editor and passionate promoter of the writers published by his company, Random House.

A violinist is playing a concert at Carnegie Hall. He finishes the piece. Voices in the audience shout, “Again! Play it again!”
The violinist is pleased. He plays the piece all the way through a second time.
“Again!” the voices shout once more. “Play it again!”
The musician’s self-satisfaction knows no bounds: this is Carnegie Hall, and I’m asked to play not one, but two encores?
When he finishes, the voices rise yet a third time, and the same thing happens after several more repetitions.
Incredulous, the violinist finally walks to the front of the stage and addresses the audience: “Seven encores of the same piece at Carnegie Hall? It’s unheard of! Am I that good?”
The audience members shout as one voice: “You’ll do it until you get it right!”