Wipe the thought of Corey Feldman as an actor out of your head. Stop focusing on that for a few moments and maybe you can get past your preconceived notion of what should have happened on the Today Show. Like many of you, I was a little confused by what I saw (online afterwards). So I went to the source to get some answers. 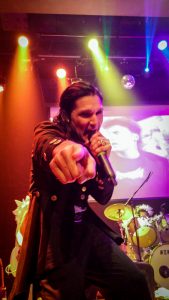 I’m writing this as a “casual fan”, as Corey called me.

Like so many people, I was curious how we got from movie star to musician, but in fact it has been the other way around the whole time. It started when he was about 3 or 4 years old and he would need to go on auditions. Before an audition his mother would lock him in a room (Corey’s words) with a record and make him learn a song. “Since 3 or 4 year olds really can’t learn dialogue, I would learn a song and then perform it so they could see how cute and adorable I was.” Then it began he would sing and dance for the auditions. Besides, he comes from a performing family. His father was a musician and his sister was a member of the Mickey Mouse Club (for those of you who remember those days – you young ones, look it up, it existed!). As a result, they spent their summers at a lot of amusement parks (performing). So actually, the musician was deeply rooted from a very young age. Moreover, Corey has several albums and has written and/or sang for ten film soundtracks (“Dream a Little Dream”, anyone?).

So why wasn’t he picked up by any big labels? And why didn’t one of his biggest friends help him? “MJ wanted to. He wanted to take one of my songs to this big producer. He kept saying it was a number one hit. But I wouldn’t let him because I didn’t want to use him that way. I never wanted him to think that was why I was friends with him. But it was great to have the King of Pop tell you your music was great.” Corey also said he felt that if he had been picked up by a label back then, he would not be the artist he is today. He would not have been able to hone his craft the way he has. “They would have molded me into what they wanted and I would have been one and done.” Now he’s free to perform what and how he likes, on his own terms. Unfortunately he still has not been in the mainstream spotlight, that is until the Today Show performance. “They were the first mainstream show to broadcast us and give us national exposure, and they were nothing but wonderful to us. It was the backlash on social media where it all went…”

I wondered why then someone would put themselves out there and expose themselves to the ridicule that I perceived was there. So I asked if there was some message he was trying to get out there with his music and these concerts. He answered: “The reason is I’m spreading a message of love and light. There is too much negativity out there. We need to let go of the negative energy because positive energy is infectious. I just want people to have fun and have a good time. Have you ever noticed that when things are going bad in your life, the more you dwell on it the more bad things tend to happen? I believe in focusing on the positive. I believe in the karmic wheel. I want people to leave there feeling like they had a really good time.”

Corey had said to expect a journey through a time capsule, if you will, and there he did not disappoint. He started the show with Ascension Millenium, ended with Go 4 It! and in between sprinkled in several songs from his other albums and his soundtracks from his movies (Dream A Little Dream/Dream A Little Dream 2, Goonies, Stand By Me). What blew me away the most was the fact that not only could he sing and dance (he is one hell of a dancer) but that he pulled off no less than 6 costume changes during his show. I can’t think of many performers who even attempt that anymore. I could name one performer, who I saw as a child, but I’m afraid many of you would say I was insinuating something about Corey by trying to compare Corey to him, but there’s a reason why they called that performer “Mr. Showmanship”. Corey has true showmanship!

This show delivered more energy than I’ve seen in a long time. There were lasers, snow (yes snow), confetti and bubbles, and none of it was done in a gimmicky way. This show is what a true “rock” show should be. It has two wonderful tributes to his two late friends, MJ and Corey. I have only one critique. So let the hate mail begin.

The Angels. Now I completely admire what Corey is doing with these girls by taking them in and giving them the opportunities they would not get otherwise. I get that. However, I am not the one to go around telling the emperor he is wearing the finest silk robes when he is in fact naked. I just won’t do it. And don’t get me wrong, each of these girls are very talented instrumentally. Vocally, however, some of them are not. When I first watched a small excerpt of the live stream of the concert from Colorado, I kept hoping that they were just having technical issues and that they were singing off key because they could not hear the feedback or something. I was trying not to judge before the show Saturday. They proved me wrong though, because in fact the same young lady sang off key again, as well as another one that it was very hard to watch. The sad thing is that during one of the other Angel’s solos, who did have a very lovely voice, when the group tried to harmonize with her, it soured the whole song. Now, I don’t know whether it is because during each of these songs Corey is off stage doing his costume changes that he does not hear this or whether he has vested too much time and energy into these young ladies to do anything about it. And just to be sure it wasn’t just me hearing this, I asked someone I trusted to give me an honest opinion of what they were hearing. Sadly, they agreed. I know the business can be taught, but unfortunately pitch, like comedy, cannot. I want to stress though, those girls can play the hell out of their instruments. There is no denying that. 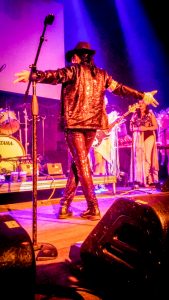 So forget any preconceptions you may have about Corey Feldman. Don’t even think about the fact he was an actor. He is an artist. He is a true musician. He is a true showman. Above all, he is true to himself. That’s what makes this show so great.