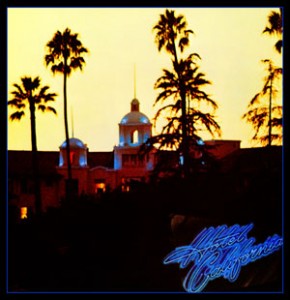 Jesse B. asked for an analysis of what has become an iconic song, The Eagles “Hotel California.” It’s the title song from the album of the same name that went on to sell over 16 million and was number 1 around the world. The song began it’s life as a 12 string demo on guitarist Don Felder’s home studio 4 track and was dubbed with a working title of “Mexican Reggae.” The first full version was cut at the Record Plant in Los Angeles, but it turned out to be in the wrong key. The second version, also cut at the Record Plant, only had a smattering of lyrics, but was deemed too fast. The third and final version with both the music and the lyrics now more refined was cut at Criteria in Miami and was actually made up of the best pieces out of 5 takes. In fact, the master tape of the song had 30 edits!

As with all song analysis, we’ll look at the form of the song, the arrangement, the sound and the production.

The Song
“Hotel California” has both an interesting chord pattern and song form. The main verse chord pattern of Bm, F#, A, E, G, D, Em, F# isn’t used much in popular music, although it is a variation of a famous Flamenco guitar chord progression. The song form looks like this:

The intro, solos and lead lines are played over the same verse chord pattern. Take notice that there’s no bridge, and instead of another chorus at the end of the last two verses, the song goes into the solo and outro lead lines. As was the case with many songs from the rock era of the 70’s, the song ends with a long fade.

The lyrics by Don Henley and Glenn Fry were actually inspired by Steely Dan, who’s vague lyrics they called “junk sculpture.” Fry remarked in a BBC radio interview that “one of the things that impressed us about Steely Dan was that they would say anything in their songs, and it didn’t necessarily have to make sense.” As a result, the lyrics consist of a series of cinematic one shots that can be interpreted in a variety of ways. That said, they are extremely well crafted, a trait that the band’s songs are noted for.

The Arrangement
“Hotel California” has an exquisitely crafted arrangement that features both many layers and some major song dynamics. The song was originally cut with all band members playing together, then layered from there.

The beginning of the first intro has one 12 string acoustic guitar on the left side with a second 12 string acoustic on the right playing a slightly different line, along with the bass playing whole notes that outline the chord changes. Take notice to the high-hat roll that appears on the right channel at the end of the 4rth bar (half-way through the first intro). By the way, see if you notice a little bit of guitar noise that was left in the space at the end of the second bar.

The second intro begins with the addition of a a long acoustic guitar strum which occurs every other chord, along with a new guitar counter line on the far left side. Once again half-way through you hear light cymbal and high hat splashes emphasizing the downbeat of the chords.

The verse keeps the same chord pattern, but now the drums enter, the bass plays a reggae line, and a new electric guitar on the right side plays reggae style muted chord “chucks.” On the next verse a harmony guitar line is introduced with each of the electric guitars panned to a different side of the soundfield.

The first chorus has a three part harmony based around the melody line, with electric guitar fills in the vocal spaces, which is identically repeated on the second chorus.

On the 3rd verse the harmony lead guitars continue and are joined by another 12 string playing a whole note strum on every chord. On the 4rth verse yet another guitar harmony line is introduced, this time in a higher register than the original, which still continues to play. The last two lead vocal lines are also joined by a higher harmony vocal. See how everything builds and gets bigger and bigger as the song goes along?

The 5th verse breaks down to the same instrumentation as the intro with the addition of the lead vocal over the chords. On the 6th and last verse, the entire band is back again playing the same parts that they played in the 4th verse.

As you can see, instruments are added as the song goes along to make it more exciting, are removed during the 5th verse, then brought back again for the 6th. It’s a great example of tension and release.

Here’s what the the arrangement elements look like:
* The Foundation: bass and drums

The Sound
In 1976 when “Hotel California” was cut, studios we not yet that sophisticated and there really wasn’t a lot of outboard effects as there would be starting in the 80’s. This song just goes to show that with a that’s well put together, just a single long reverb can sound pretty good. You can really hear the reverb on Don Henley’s voice mostly on the first and 5th verses when there’s not a lot of instruments in the mix.

At the end of the second chorus, the reverb is muted so there’s silence for a beat. It’s gradually introduced back into the mix during the 5th verse. The drum kit is bone dry, which contrasts agains the rest of the instruments that have from a little to a lot of reverb, although the effect never sticks out of the mix.

Everything on this record is pretty clean sounding, and the guitar sounds (both acoustic and electric) are fantastic. Much of that has to do with great players and great gear, but you have to know how to capture it as well, and engineer/producer Bill Szymczyk does a fine job.

In terms of mixing, this is a dense mix at times yet everything has its place, most of which comes because of the different sound between the guitars, and how they’re panned. If you take notice, all the guitar harmonies are panned left and right, as are the acoustic guitars that are the backbone of the song. The bed 12 strings do get buried at times but that’s mostly because they’re not needed any louder at that time.

Also notice how low in the track the vocals and the lead guitars are mixed. This was common in the 70s, mostly because that was the best way to keep the band sounding powerful in the mix. The other thing to listen to is how high in the mix the snare and high-hat are, yet the kick and bass still remain solid, although they don’t have the bottom end that you’d expect if the mix were done today. You can hear the compressor work on Don Henley’s voice during most of the song, like at about 1:45 on the last line before the chorus.

The Production
The production by Szymczyk here is exceptional, since the dedication to perfection is observed without the loss of feeling. Just the fact that the song was cut three times tells you that getting it right was primary in the the band and producer’s minds, as was the fact that the final track was an amalgamation of many takes. The solos and lead parts were worked out over a two day period, which is an enormously long time for that period in music when most recordings happened much more quickly. Still all the excitement is kept and nothing ever feels labored, which is the mark of a great production.

Send me your requests for song analysis.

Under Creative Commons License: Attribution
The front cover art work is a photograph of the Beverly Hills Hotel by David Alexander with design and art direction by Kosh.[