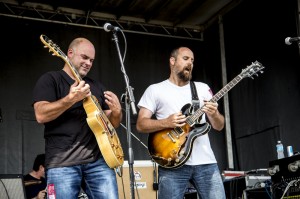 Regular readers of On Stage should remember the Easthills, as we’ve been giving them quite a bit of coverage between our review of their set at WARMfest and a song by song analysis of their album, Death of a Salesman. Well, we’re here to present you with another installation in ongoing Easthills coverage: an exclusive interview with On Stage immediately after their WARMfest set. Vocalists and guitarists Will Barada and Hank Campbell were kind enough to sit with us in the cab of Hank’s truck to discuss firsthand everything one should know about one of the fastest rising bands in the industry.

On Stage Magazine (OSM): Man, you guys played a great set up there. How has your WARMfest experience been thus far?

Will Barada (WB): It’s a cool festival, it seems like the staff went really emphasized quantity of bands, which is cool. It’s great seeing what different people bring to it and all the different styles.

Hank Campbell (HC): Plus it’s only 3:30, so hopefully things start to get heated up this evening, weather permitting. But it was cool, the sound was great, and we got more people than I thought we’d have. It was really hot though.

OSM: You guys wrote the songs on your album over the course it decade, if I’m correct. 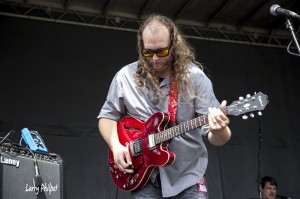 HC: Some of them. The thing that was somewhat misleading is that someone put out their this was an album 15 years in the making, like Chinese Democracy or something, which isn’t exactly accurate. The band is brand new, only two years old. Some of the songs do go back 15 years ago.

WB: Bits and pieces of songs are from earlier, but its not like we’ve had this whole album written for that long. Some of the songs were written during these last two years. The friendship and the love of doing it is even older, pushing 25 years.

OSM: It’s always cool hearing bands where it’s obvious that they’ve played together for a long time, and we thought you guys certainly had that element. Have you heard that before?

HC: [laughs] Thanks, that’s cool. People have drawn that comparison before; they’ve wondered if we’re brothers and things like that because of the harmony and our good looks.

OSM: That closeness between you two is such a great dynamic. What does that make your songwriting process like?

HC: Originally, when he and I first started noodling around with guitar riffs, we didn’t really even know how to play. Some of these songs were born strictly off those guitar riffs. We’ll take a riff and kind of develop it from there. Some of the early ones were raw like that. Now we write a lot on our own and present those ideas to everybody else in the band, and we’ll work on it from there. The big thing about this band, the potential for it if people really want to hear more, is that the backlog is deep. We have dozens of songs that if people like it we are willing to start releasing. I feel like that’s something we can offer that a lot of bands in our position don’t have.

WB: I pretty much agree with what [Hank] said, some of the songs come from a riff, and others from a lyric idea. We both have a solitary drive to work, like a lot of my ideas come while I’m driving to work in the morning. I’ll just get a line or a riff that works in my head in build around it. Once we’ve heard each other’s stuff, the fun part starts, when we get to add bits and pieces to the song.

OSM: That’s pretty great; you mentioned having a backlog of songs and also that you’re still writing songs today, is there a new album coming soon?

WB: We’ll still have big guitars and harmonies though. That’s kind of what we try to do.

OSM: Are you guys touring or playing any gigs until you start working on the new album? 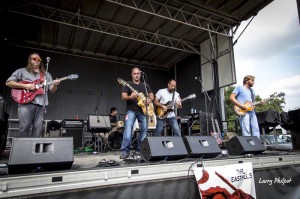 HC: In a couple of weeks we’ll start a run with Fastball, which we’re pretty excited about. We’ve played out a lot recently, which has been great. They’ll be a few in November probably. We’ll have some videos we’ll be releasing.

WB: We’ll actually be playing in Nashville at the Exit In during that run. It’ll be the last one of the five day run. After that we’ll be playing a show with Here Comes the Mummies, which is such a fun band. There’s also going to be a few EP’s of stuff we didn’t put on the last album; one is going to come out around Christmas and the other one 6 months later.

OSM: If you’ve already got all of these songs recorded, surely you guys must have a favorite piece of music gear.

WB: I’m a lefty, and I’ve never really been in a position to spend a massive amount of money on a custom lefty, so I just kind of dumb lucked my way into my Epiphone hollow body and Fender Deluxe Hot Rod. We’re almost anti-gear in terms of pedals. But we just kind of played different stuff until we found things we liked. I’m probably the least of a gearhead of anybody in the band [laughs].

HC: We jokingly call it honest rock, it is pretty stripped down. There’s not a lot of elaborate solos or crazy tech effects. We focus more on lyrics. If I had the time and the money though, I love 2” tape machines. When we used send ideas back and forth we would do it on this old Ampex, it was a 1/4” reel to reel. We’ve done a ton of recording with that. If we had the money we would get a nice 2”.

WB: Have you ever gotten the chance to do any recording like that?

OSM: We actually have, through Belmont University for a few different friend’s band. They have a great 2” there.

HC: Yeah, I’m a big believer in analog. Obviously things change, and that’s fine, but it’s amazing to think how bands used to go in the studio and have to get it perfectly in just a few takes on tape. Now with computers anyone can go back and edit themselves, which is convenient, but I think we might have lost something there. There’s something to be said about capturing a performance on tape. That’s something we’re going to focus on a lot for our next album.

OSM: Do you guys have any remarks for fans before we part ways?

WB: Not really, just that we appreciate you guys and the opportunity.

HC: And come see us when we’re in the area [laughs].