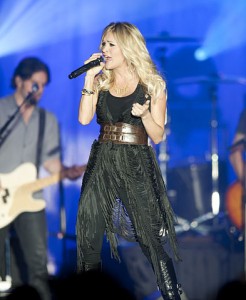 OnStage has obtained a copy of the 33 page lawsuit brought by some stars of American Idol against Sony Music Entertainment (hereinafter, we will refer to them only as Sony), and the allegations, if true, may change the game in online music streaming and could expose some disturbing business practices.  In the process of discovery, where each side must turn over requested documents, one of the claims specifically alleges that Sony Music Entertainment – to broad brush this explanation, misclassified some music “streaming” and declared it to be “sales”, presumably to pay the Artists a lower rate. While this may seem to just be an exercise in semantics, the interpretation can involve large sums of money. There is a similar lawsuit filed against Sony in 2012,  brought by the rock group “Toto.”  You can read that suit HERE

Being mindful that a lawsuit is only one side of the story, the points covered in the Complaint prompt a very obvious question.  If this is true, and Sony Music Entertainment is misstating sales to the Artists, when they are really streams, at a much reduced rate are they also using this same formula to report sales to the Entities that rank the Top 40 and the Top 100? According to Billboard‘s website,  “As we wrote in January when YouTube data was added to the Hot 100’s equation: “Generally speaking, our Hot 100 formula targets a ratio of sales (35-45%), airplay (30-40%) and streaming (20-30%).”

And, further assuming, if this alleged reporting affects what is played on Top 40 Radio or Record Charts,  would there be financial benefits if someone could skew or manipulate, say Billboard’s Hot 100?

We’ll discuss what is in the complaint, but let’s give you the background that we can get by reading the complaint.

A group of American Idol winners and contestants have clearly become famous, and recognized talented performers. The plaintiffs that have initiated the suit are known collectively as “19 Recordings“, and we will refer to them as they are referred to in the complaint as simply “19”.  19 Recordings was founded by American Idol creator Simon Fuller and is now controlled by the show’s owner, Core Media Group. The artists of “19”, including Kelly Clarkson, Carrie Underwood, Chris Daughtry, Clay Aiken and by inclusion, for the most part, all of the contestants on the show who entered into deals with Sony, claim that Sony has been using an improper formula to compute royalties, charging excessive fees and using questionable accounting practices to cheat them out of over $9 million.

15 Million Albums in the US alone, and is the best selling album artist in the last 10 years

Chris Daughtry, #4 in the 5th season

The group of Plaintiffs, referred to as “19”, were signed to exclusive recording agreements and, as described in the complaint, entered into licensing agreements with Sony for the winners and certain other finalists, which permitted Defendant Sony to exploit these artists’ recorded work and reap millions of dollars in profits.  Also mentioned in the lawsuit are David Archuleta, Kellie Pickler,  and Jordin Sparks. Artists launching their careers from American Idol have collectively, to date, achieved over 400 Billboard “number 1s”

Beginning in late September, 2002, “19” and Sony entered into a series of exclusive license agreements, and through these agreements, 19 granted Sony the exclusive right to manufacture, advertise, promote, distribute, sell and otherwise exploit, and to license such rights to others, the individual recordings of the Artists throughout the world.

The work included some of the biggest hits of the 21st Century. In consideration for 19’s performance, Sony agreed to account and to pay under a certain royalty structure. In order to ensure that Sony correctly accounted and paid 19 under the agreements, Paragraph 17.4 of each recording agreement gave 19 the explicit right to inspect Sony’s books and records through an audit procedure.

Pursuant to it’s audit rights, 19, using two accounting firms performed audits. According to the suit, the Audits revealed a wide array of underpayments by Sony, including systematically incorrect calculations which resulted in significant underpayments. The suit states that there were the same or similar underpayments to each of the Artists’ accounts. Some breaches were unique to one or more given artists.

The Audits have been ongoing since 2008. The suit states that some of the reason the parties have been unable to settle the Audits is due to Sony’s refusal to allow 19’s auditors access to all the necessary books and records that need to be reviewed in order for the auditors to calculate all potential claims. Despite Sony’s failure to provide the necessary and relevant documentation, 19 has been able to determine a number of ways in which Sony has breached the agreements, and believe more will likely be found if 19 and their auditors were given full access to Sony’s books and records.

The Complaint states that Sony failed to properly account to and pay 19 for Masters licensed to third party streaming services (i.e., third party services that license the Masters from Sony and broadcast or “stream” them over the internet to end users) by wrongfully stating that the underlying licenses between Sony and their third party streaming providers characterize the streaming as “sales” or “distributions” instead of “broadcasts” or “transmissions”  This mis-characterization would result in a lower royalty rate for permanent downloads.

Another point discussed in the Audits reveal that Sony incorrectly deducted a number of unsupported charges from the royalties due to 19. These expenses include both actual expenses that are not permitted under the terms of the agreements, as well as expenses for which Sony is unable to provide any backup to show that it actually incurred the expenses that are alleged.

In responding to the Audit, Sony admits that it has incorrectly paid some royalties based on it’s failure to calculate roayties for the domestic “Now Series.”

Onstage has contacted two legal experts in IP law who work in the Entertainment business, to get their opinions.

“It seems that the main issue revolves around a basic question: when a user streams a song on spotify, etc., does that count as a “sale” of the song, or a license for the public performance of that song.

Keeping in mind that the complaint only tells one side of the story, here it appears that the Plaintiffs exercised their audit rights under the recording contract and Sony was caught with their hand in the proverbial cookie jar.  The main allegation, it appears, is that Sony was intentionally under-paying artists when their songs were streamed or distributed online, deciding to call it a “sale” or “distribution” under the lower rate.  This seems very similar to the Universal Music/Eminem case that I mentioned. Eminem previously sued Universal Music in a similar case, to determine whether iTunes sales counted as “sales” or “licenses” under his record deal.  He was to be paid 12% for sales, vs. 50% for licenses.  Thus, Universal decided the iTunes downloads were album sales, and paid 12%.  On appeal, the Ninth Circuit sided with Eminem, and said he should have been receiving 50% of the iTunes revenue.  In this case, Spotify, etc., seem even more clearly to be a license, instead of a sale, though much may depend on the actual language of the contract between Sony and the Idols…

The Plaintiffs also allege a number of other bookkeeping problems that each, not surprisingly, worked out to the label’s benefit.  Overall, this is why an audit right is important in artist agreements.  I’m guessing that the allegations made by 19 Recordings might apply equally well to alot of other Sony artists that haven’t exercised their audit rights.  Sony’s response will be interesting – this lawsuit is clearly not a surprise to them and the two sides have obviously already been negotiating for awhile…

Essentially, it sounds like Sony has been considering it a “sale”, since they have to pay lower royalties to the artist than if it was a “license.”  However, Sony’s interpretation could very well be wrong.  “

“One thing that’s interesting about this case is that it highlights a possible disconnect between the way music streaming services such as Spotify work, and the way the recording industry accounts for music royalties.  For example, when I go on line and search for a song on Spotify and listen to it through my computer, that’s obviously an example of streaming, and my computer temporarily downloads the song so that it can deliver the music to my speakers.  However, if I decide to include the song in one of my playlists, and that playlist is one that I can access even when I’m not connected to the Internet (which Spotify allows paying subscribers to do), then that temporary download becomes something more permanent.  I’m basically renting the right to access that song off-line on a month-to-month basis, so long as I pay my Spotify subscription fee each month.  .

To borrow the language used in the lawsuit, when I make a track available for off-line access, is that a “sale” or “distribution” of that track (payable at a lower royalty rate), or is it a “broadcast” or “transmission” (payable at a higher royalty rate)?  Or is it something in-between?

The suit doesn’t really talk about that situation, and I don’t know how material it is in terms of numbers of downloads involved.

What the suit does talk about in more general terms, is whether when Spotify makes a song available to me the first time I access it, is that a “broadcast” or “transmission,” or is it a “sale” or “distribution”?  That distinction is important, because according to 19, different royalty rates apply depending on how it’s characterized.

Another reason for the suit appears to be so that 19 can get full access to the agreements between Sony and the on-line music streaming companies, as well as other Sony internal documents that were not fully disclosed to 19’s auditors.  It would be very interesting if, for example, an agreement between Sony and Pandora characterizes what Pandora does as a “broadcast” or “transmission” of music, but Sony is telling 19 that what Pandora is doing is a “sale” or “distribution” of that music.  In addition, many of the other claims in the lawsuit cite to Sony’s alleged failure to provide 19’s auditors with what 19 believes was necessary documentation.  The litigation discovery process should force Sony to turn over many of these documents, though at a much higher cost than if it had done so earlier.”

More on this as it develops, and it will be interesting to read Sony’s responses, to see if this opens up the floodgates for more audits, and especially if this skews, or at worst manipulates the rankings in the Top 40 or Top 100.

As always, comments are welcome.