Garth Brooks to Perform at the Ryman Sept. 8th 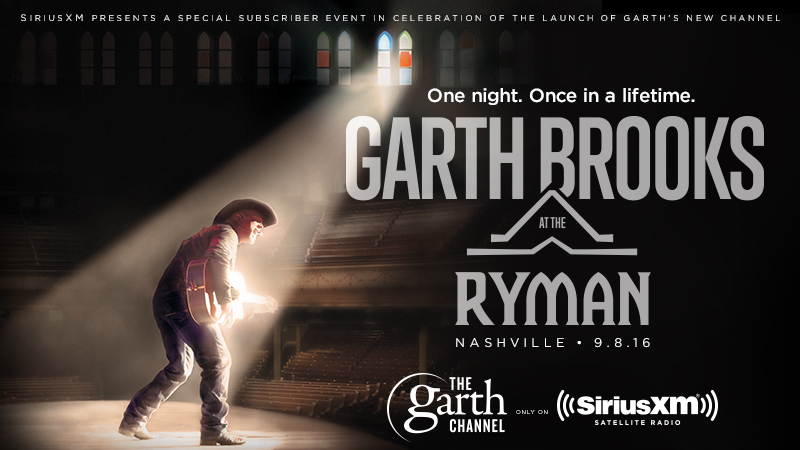 Garth Brooks to Perform First Ever Concert at the Ryman Sept. 8th in Nashville to Launch his SiriusXM Channel

– Brooks set to give intimate, private concert at the Ryman Auditorium for the first time in his career

– Concert for SiriusXM listeners to air live on The Garth Channel

NEW YORK and NASHVILLE, Tenn., July 27, 2016 /PRNewswire/ — SiriusXM announced today that to launch The Garth Channel on SiriusXM, Garth will perform a special invitation-only concert for SiriusXM listeners at the historic Ryman Auditorium in Nashville. It will be the first time in Garth’s career that he has put on a full concert at the Ryman Auditorium.

“Just the thought of playing the Ryman is crazy. The fact that SiriusXM is going to capture the evening makes it even a bigger event for me,” said Garth Brooks.

“It will be a special moment for Garth at the Ryman, and we are excited to present this one-of-a-kind performance to our national listening audience. As Garth is showing on his current tour, he holds nothing back, and for him to play the Mother Church of Country Music will be a treasured moment for his many fans,” saidScott Greenstein, President and Chief Content Officer, SiriusXM.

The private concert at the Ryman Auditorium for SiriusXM will air live onThursday, September 8 on SiriusXM’s The Garth Channel, channel 55, and through the SiriusXM app on smartphones and other connected devices, as well as online at siriusxm.com.

The Garth Channel, the new, exclusive channel, which marks the first time Brooks’ music will be available 24/7 in one place, on radio or online, will be curated and presented by Brooks. The channel will feature music from America’s best-selling solo artist of all time, spanning four decades, along with songs from the artists that influenced his iconic career as well as his hand-picked favorites by contemporary performers he admires.

SiriusXM’s The Garth Channel will also include regularly hosted shows and behind-the-scenes commentary from Brooks, guest DJ specials hosted by his fans and friends, live concert recordings and other rarities from Brooks’ treasured archives.

SiriusXM subscribers who have had an account since July 11 will have the opportunity to enter to win tickets to Garth Brooks’ private September 8 SiriusXM concert beginning July 27, by a radio Call-in opportunity (see Official Rules for complete details at www.siriusxm.com/GarthBrooksRymanCallIn), and beginningJuly 28, by online entry (see Official Rules for details atwww.siriusxm.com/GarthBrooksRyman).

Garth is currently on the three year Garth Brooks World Tour with Trisha Yearwood. The tour began with 11 sold out shows at the Allstate Arena inChicago. The tour is smashing records previously held by such acts as The Beatles, The Rolling Stones, and even Garth Brooks.  In just over a year and a half, the tour is approaching 5 MILLION tickets sold making it the biggest tour in the world.