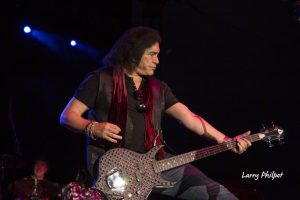 KISS Demon Gene Simmons brought a 4 piece backup band of top notch musicians from Nashville to Hoosier Park Casino in Anderson, IN on June 9, and it was a free for all filled with audience participation and a group sing-along. While his KISS character is The Demon, this writer found him one of the most personable entertainers in the business. During several songs, he invited members of the audience to sing backup, with over 60 audience members on the stage at one time.

He took the time to interact with children who were in costume and kissed a 74-year-old woman who’d wanted to meet him for nearly 40 years. Below are some photographs from the show to give you an idea of what it was like.