Honoring the birth of Syd Barrett today in 1946, we celebrate his enduring legacy – still alive, still thriving, still evolving — and the legacy of Pink Floyd with, “Time” by Greensky Bluegrass. 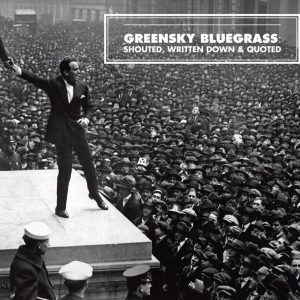 For more than a decade and a half, the members of Greensky Bluegrass have created their own version of bluegrass music, mixing the acoustic stomp of a stringband with the rule-breaking spirit of rock & roll. “You can call us an acoustic ensemble, or a drum-less rock band, or a rock & roll bluegrass band,” says mandolin player Paul Hoffman, who, along with guitarist Dave Bruzza, handles most of the album’s writing duties. “All of that shifting identity has taught us to cover a lot of ground.”

Playing as many as 175 shows per year, Greensky Bluegrass have graduated to headlining status at some of the country’s most iconic venues, selling out amphitheaters like Red Rocks and world-class auditoriums like the Ryman. They’ve become a regular name on the festival circuit, too, adding Bonnaroo, the New Orleans Jazz Festival, Austin City Limits, Forecastle, and Outside Lands to their touring schedule. Supported by a grassroots audience whose members often travel for hours to see the band, Greensky Bluegrass are still a proudly independent act, enjoying the success of a major-label act — including a Number One debut on the Billboard Bluegrass chart for their fifth album, 2014’s If Sorrows Swim — without giving up complete control of their own business.

Greensky Bluegrass is redefining that sound once again with their sixth album, Shouted, Written Down & Quoted. Like the band’s own name, Shouted, Written Down & Quoted is a collection of opposites, full of dark psychedelic swirls, bright bursts of acoustic guitar, soundscapes, solos, freethinking improvisation, and plenty of sharp, focused songwriting. It’s wild and wide-ranging, showing off the diversity Greensky Bluegrass brings to every live show. At the same time, Shouted, Written Down & Quoted is unmistakably a studio album, recorded during two different sessions — one at Echo Mountain Studio in Asheville, North Carolina; the other at the Mountain House Recording Studio in Nedarland, Colorado — that comprise the band’s longest block of recording time ever. The result is an 11-track album whose songs cast a wide net, mixing the full-throttle energy of a Greensky Bluegrass concert with the nuanced approach of a band that’s still eager to explore.