An Interview with the Wild Feather’s Ricky Young 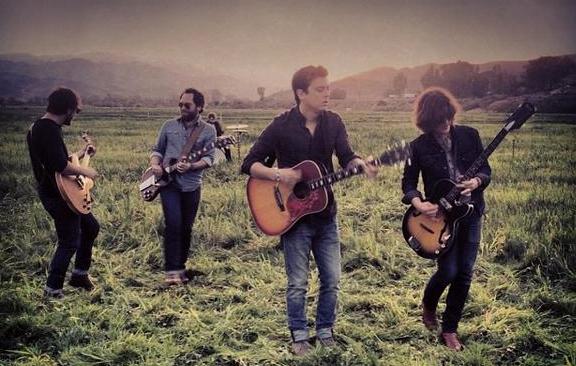 These days, it seems like everyone wants to be in a band. While us at On Stage certainly don’t want to discourage the making of new music, it’s undeniable that the ease with which one can make and record new music has saturated the market with thousands and thousands of albums that otherwise would have went unreleased. This isn’t always a bad thing, but it does make it far more difficult for an act to grow big. When we heard that Nashville based five piece the Wild Feathers were experiencing massive amounts of success from the release of their self-titled debut, it really made us wonder what distinguishes this act from their many competitors. In our unrelenting quest for answers, we got a chance to sit down with Ricky Young of the Wild Feathers to talk about the band’s success, what makes them different, and how a band’s roots might affect their sound.

On Stage Magazine (OSM): Thanks for being with us today! It’s my understanding that the Wild Feathers are playing a show tonight. Is that true?

Ricky Young (RY): Yeah, we’re in Baltimore as part of our tour. We actually had the night off last night though, which was great. We all did some laundry and rested up, so we’re feeling great today.

OSM: When you aren’t touring around, the Wild Feathers are based out of Nashville, yes?

OSM: Do you think having Nashville as the band’s base of operations might have an influence on the sound and dynamic of your band?

RY: Do you mean more coming from Nashville or living there currently?

OSM: I more meant living there currently, since none of you are originally from Nashville are you?

RY: No, we’re not. We’re actually from all over. That being said, I think living in Nashville does have a lot of influence on the way we sound and how we listen to music. I’ve been living there for about nine years now, and it’s always been something that makes you want to work a little harder. Everyone’s so great, and it’s really saturated with successful, extremely talented musicians, so when you show up it’s obvious that some work needs to be done. I think that’s a good thing, though. There’s always bigger fish in the pond, and you can always better yourself.

OSM: How do the Wild Feathers go about differentiating themselves from a lot of the other bands that come out this scene?

RY: I don’t know if we set out to do anything [laughs]. It’s more a subconscious type of effort, though we did want to try things differently in terms of multiple vocalists and multiple songwriters, so we’re just kind of doing what we do. Hopefully we sound like the Wild Feathers, and I think we’re achieving that.

OSM: Do you think that having multiple vocalists and songwriters in the band alters the band dynamic and differentiates you guys from a more traditional set up?

RY: Yeah, I definitely think it does. In all my previous projects, I was the main, sole songwriter, and now I have two other ones that are really great. I feel like that gives us an advantage in figuring out songs; it’s a cliche, but it’s true that two heads are better than one. In this case, there’s way more than two heads.

OSM: Can it be frustrating having to collaborate on all songs and loosing control over your ideas?

RY: Not yet [laughs]. Right now, we got along pretty great. There’s always a democratic, uplifting vibe in the air. We’re just having a good time and trying to see if things pay off with the record we just made. We want to see people react and respond to it; that’s what we set out to do. We wanted to make a record that was great from start to finish, and I feel like people are starting to recognize it as such.

OSM: It’s a great record. How long did it take to put together?

RY: We had written a lot of songs for the record for a couple years. The actual tracking took two and a half weeks, so it’s kind of hard to say exactly how long it took.

OSM: Where was it tracked?

RY: We tracked it in Nashville with Jay Joyce at his studio. Jay’s an amazing producer and musician, and it was a great process from start to finish.

OSM: That’s great. Changing gears a little bit, in your online profiles, you guys put up a statement along the lines of “before things fractured into thousands of subgenres, there was simply rock n’ roll.” Would it be a fair statement to say an objective of the Wild Feathers is to return to this state of pure rock n’ roll?

RY: Yeah, the way we try to look at rock n’ roll is that there are so many headings underneath that. You’ve got the blues, rhythm and blues, folk music. All of these genres that we loved growing up (and still love to this day) all fall under the label of rock n’ roll. So as an American rock n’ roll band, that’s what we do. We’re influenced by all kinds of different things, but it makes up one main dish, if you will.

OSM: I think you guys really pull that off well. By the time it gets through all the production, mixing, and mastering processes, your music seems so energetic and full, both of which are hallmarks of the rock n’ roll sound. How do you achieve that sound?

RY: We’re just trying to enjoy what we’re playing and believe. We also feel that people will believe in it too. As far as sonically, we actually have a pretty simple structure. We’re a standard rock n’ roll with guitars, multiple snares, bass, drums, and even some organ. There’s not any trickery or anything, we just wanted a full sounding record. We put all those instruments on there, and it just came up full.

OSM: That full sound can be heard tonight in Baltimore, but you guys are on tour currently.

RY: Yeah, we’ve been on tour since mid-January. We don’t actually go home till March 26th. We’re travelling all the way across the US, out to California, back to Texas for SXSW. We then fly to the UK for a tour there. After that, we’ve got a bit of time off, some festivals, maybe a bit more time off, and then we’ll start up another tour.

OSM: That doesn’t sound like it leaves a lot of time for writing and recording new tunes.

RY: We actually have a good amount of songs already written for the next record. I don’t know when we’ll go about doing the recording of them, but we could probably make another record right now if we wanted. We’re just taking our time; the last record hasn’t even been out for a year, so we’re still working to promote this one. We’ll cross that bridge when we get there, but for now we’re still having a good time riding out the last record.

OSM: You just mentioned SXSW, what other festivals are the Wild Feathers looking forward to playing?

RY: To be honest, all the festivals kind of come together in a haze. I know we’re doing a lot of them, and we did a lot last year, like Firefly. This year seems so far off though that it’s hard to remember what all we’re doing. We love festivals, however. We love the environment and getting a chance to see other bands and meet fans.

Thanks again to Ricky for giving us a minute to talk about their upcoming dates and the inner workings of the Wild Feathers.