“On stage I make love to twenty five thousand people; and then I go home alone.” ~Janis Joplin

Janis Joplin was only 27 in 1970 when she died of an unintentional heroin overdose at the Hollywood Highland Gardens Hotel (formerly the Landmark Motor Hotel.) Back then, the Landmark was just a humble, motor motel. The Hollywood hotel was built in the 1950s just off Hollywood Boulevard. Its location attracted entertainers and celebrities, including Rat Packers, Jefferson Airplane, Siegfried & Roy, and Janis Joplin. There is an “urban myth” surrounding room 105 at the Landmark/Highland Gardens.  Locals whisper that it is a crossroads and the hotel should be called the “Crossroads Hotel” because of all the soul selling that’s been done there.

Janis lived and Died in Room 105 at the Landmark Hotel. 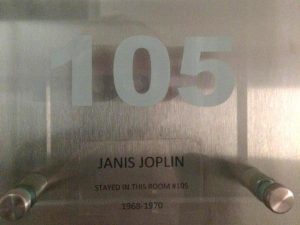 She was staying at the Landmark Hotel with her new band, Full Tilt Boogie. Janis and the band were recording her fourth album at Sunset Sound Recorders , blocks away from the Landmark Hotel in Hollywood. She died before all the tracks were fully completed, but there was enough good material to compile an LP. The result of the sessions was the posthumously released Pearl (1971), which became the biggest-selling album of her career and featured her biggest hit single, a cover of Kris Kristofferson’s “Me and Bobby McGee.”

On October 4th, 1970, Janis failed to show for a recording session. Her road manager, John Cooke, went to the Landmark Hotel where he discovered her body in Room 105.  She was found alone, face-down, and wedged between the dresser and the bed after injecting heroin sometime before.

In the 1980s the Landmark was renamed the Highland Gardens, and instead of hiding the fact that Janis Joplin had died in room 105 (the Landmark owners had kept the room number a secret), the new owners decided to promote it. It’s a popular sleepover spot for believers in ghosts and the pictures on the website look inviting, but the reality may be entirely different. Many of the rooms in Highland Gardens have been redone over the years, but Room 105 has remained basically untouched.