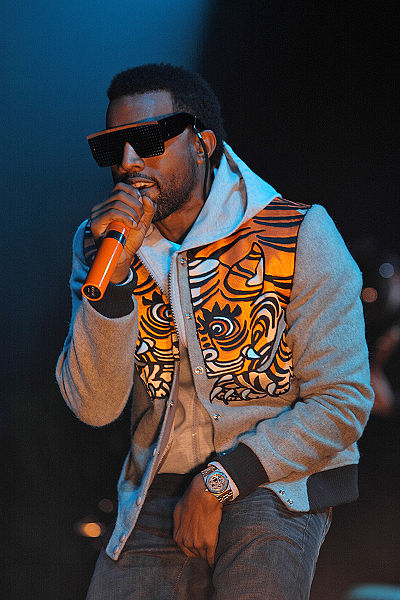 Permission is granted to copy, distribute and/or modify this document under the terms of the GNU Free Documentation License

During his concert Saturday night at the Golden 1 Center in Sacramento, Kanye West dropped a rotten egg on his fans with a rambling 17-minute speech that made even Snoop-Dogg wonder WTF?

He compared himself to President Elect Donald Trump and chastised President Obama, criticizing his “blackness and saying such truth-telling is necessary for progress.

“Obama couldn’t make America great because he couldn’t be him to be who he was,” he said. “Black men have been slaves. Obama wasn’t allowed to do this” — Kanye screamed here, ending with — “and still win!! He had to be perfect. But being perfect don’t always change things!!”

He suggested that star maker, producer, and friend Jay-Z might hire a hitman to kill him and called out Jay-Z’s wife, Beyoncé, for playing politics with the VMAs saying,

“Beyoncé, I was hurt because I heard that you said you wouldn’t perform unless you won Video of the Year over me and over ‘Hotline Bling.’”

He went on ranting about Bey adding,

Kanye ended the show after just 30 minutes and 3 songs, telling the crowd,

He’s right — but I’m not sure we here at Onstage, or contemporaries like Snoop-Dogg are going to meet his passive aggressive expectations. How about just aggressive?

Yes, Kanye. The show IS going to be over. How long will people pay money to hear 17 minutes of shit and 3 songs? How many times can promoters and venues eat shit for temper tantrums before they say pass? Wasn’t he the guy citing bankruptcy as a solution to his finances not so long ago? I’d try to keep the millions flowing if I shared those circumstances, but I budget like a real person, not a Kardashian. Even Snoop-Dogg, who’s seen some weird shit, thinks this behavior is weird. Kanye is reaching the Britney Spears/ Martin Lawrence level of fame and soon his public meltdowns will be happening naked, in the middle of Hollywood Blvd. Like we say here in Texas, Bless His Heart.

On Sunday, the Golden 1 Center announced that ticketholders would be paid back in full, including Ticketmaster fees.