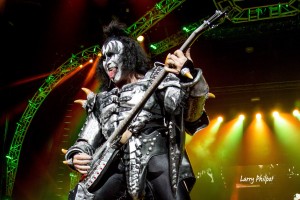 A few months back, I remember reading about how, despite the infighting among the founding members of KISS, the iconic group announced an ambitious 40th Anniversary tour, along with Def Leppard. I filed it away as potentially a great show, but not one I’d probably get to see. But here I am in Indiana, 24 hours later, battling insomnia at 4 am, with KISS and Def Leppard music still ringing in my ears.

I hopped a flight from Texas and arrived in Indianapolis, Indiana on a hot August afternoon.  Just hours before my flight, I received word that I’d been approved to see, not just any ol’ band, but the Rock Gods that ARE KISS. On the way to the venue, looking over my materials, I was excited to see that the co-headliner with Kiss, was the legendary Def Leppard, one of my all-time- favorite bands. How much better was this night going to get!?

Never having experienced a KISS concert in person, this was just the way to do it! The Klipsch Music Center, just north of Indianapolis, is an outdoor amphitheater seating close to 25K. I’m usually a lawn girl in these instances — mingling with the folks, feeling the body heat, soaking up the energy from the crowd, and drinking cold beer that winds up warm too early. Not this time. This time it was 2nd row, full out and full blast rock-n-roll.
The opener – make that “eye opener”, was the Dead Daisies — a band out of Australia I wasn’t familiar with, but I enjoyed. I always consider the opportunity this represents to up and coming bands. I admire their dedication and sacrifice to entertain people who are waiting for something bigger, better, and “badder” to take the stage. Any warm-up band on tour with a Super Group like KISS might find it difficult in the blistering heat to keep and capture a crowd eagerly anticipating the headliner; however, they engaged the crowd and had an incredible set. Like any opening-act, they realized they were fillers leading up to the big bang, but that didn’t slow the Dead Daises down. Front-man, Jon Stevens, pointed out the empty front row seats, laughed good-naturedly, and remarked that the rich people had not shown up yet.

Researching for this article, I found that there is certainly enough experience and rock-n-roll hijinks associated with the members of this group to keep a writer busy for years.
The Dead Daisies consist of.
• Richard Fortus, Lead guitarist, formerly of Guns and Roses and Thin Lizzy.
• Marco Mendoza, of the reformed Thin Lizzy also toured and recorded with Ted Nugent and Whitesnake.
• Lead Singer Jon Stevens of INXS,
• David Lowy rhythm guitarist of INXS
• Keyboardist Dizzy Reed from GNR
• Drummer Brian Tichy from Whitesnake, Foreigner and Ozzy.
The stand-out performers, from my perspective, were lead guitarist Richard Fortus, (formerly of Guns and Roses and Thin Lizzy) and front-man Jon Stevens (formerly of INXS.) Stevens like any veteran front-man knows how to carry a tune and work a crowd.

During a short break, I drank a cold Leinenkugel Summer Shandy with our photographer and sipped on a chilly shot of Jägermeister for the low, low price of $37 ~rollingeyesface~ while the roadies prepared for Def Leppard to take the stage. The economics of these events always astound me, and I find myself running the line, “whatever traffic will bear” through my mind. By some innate herd instinct, the crowd could feel the energy swell and moved toward the main stage to wait with great anticipation for Def Leppard to begin their set. I was a huge fan of Def Leppard growing up and remember the controversy associated with this band the last time they played my city. You see — I’m from El Paso. (Read more on the El Paso Def Leppard controversy here: http://defleppardandelpasotexas.com/NovemberA.html. ) Because of that controversy, Def Leppard refuses to play in the only city that rhymes with asshole, my hometown. This was a special treat for me. The energy, good vibes, and stellar musicianship from this band permeated the entire venue, catching fire and spreading thru 26 thousand concert goers. Def Leppard appears to be having more fun, with more confidence, than ever before. As they launched into Rock of Ages, people young and old stood, bounced, sang, shook their booties, raised their hands in the traditional rock god salute, and dripped sweat along with the members of Def Leppard and Frontman, Joe Elliott.

“Gunter glieben glauten globen” boomed from the speakers and the crowd went wild. Never missing a word, the crowd showed their appreciation for a band that has beaten the odds at almost every turn. You see, Def Leppard should not be here. The drummer for Def leppard, Rick Allen, was in a terrible car accident leaving him with only one arm. Most bands might have called it quits, or sought a replacement for their drummer, but not Def Leppard. They overcame that obstacle with an ingenuous grace and style that most bands will never have to face. Allen should be considered one of the best drummers of his generation – plus, he gets extra points for difficulty. Drummer, Rick Allen brings a whole new meaning to the phrase Double Kick Drum. He uses four electronic pedals for his left foot to play the pieces he used to play with his left arm. I could say much more about Def Leppard, but after all, I was there to see the grand masters of rock-n-roll, KISS.
After another short break where I mingled among the crowd and ogled the concert goers decked out in face paint, KISS took the stage to find a fully prepped and ready crowd. Easily pliable and manipulated into a frenzy when the fireworks and flames erupted from behind and to the side of Drummer Eric Singer’s drum kit. The well-oiled machine that is KISS doesn’t miss a beat or let an opportunity slip by to flirt and engage the photographers in the pit, the VIPS in the front rows, or the crowd high up on the lawn.

The KISS army is legion and the ages of the fans run the gamut. I chatted up a young, hip-looking grandmother standing in line to use the bathroom. She was holding the hand of her 9 year old granddaughter who was festooned with the star Paul Stanley wears over his right eye showing her allegiance to the KISS Army. Kiss is more theatrical and more professional than I anticipated before actually seeing them from the 2nd row. I got a Very Vegas Vibe from KISS, and I mean that in the nicest sense possible. Kiss ‘aint fucking around and their dedication and loyalty to their fans is palpable. The phrase “consummate professionals” kept popping up and I marveled at the skills of Paul Stanley, Gene Simmons. Tommy Thayer, and Eric Singer. Gene Simmons really appears possessed during certain segments of the show, and I had to keep in mind that Shannon Tweed (sexy, classy wife of Gene Simmons) wouldn’t marry a demon. From a cable that catapulted Simmons into the elaborate ceiling high above the stage, to the zip line that Front man, Paul Stanley, used to give the lawn ticket holders an up close and personal experience, this show was unforgettable.

A KISS show is BIG!!! With fireworks and flame throwing, I think maybe Row 2 is too close for this red-head, but right up the alley of those who like to live on the edge. Everyone in the venue, including the peeps high up on the lawn got their money’s worth, and much, much more. Starting with a surprisingly high energy performance from the Dead Daises, and a power set from Def Leppard that had our photographer singing at the top of his lungs, and behaving like a teenage girl at a Drake show, KISS brought four decades of hits, instantly recognizable makeup, and a fiery stage show to the Klipsch Center on Friday night. Despite the searing heat, and at least 20 lbs. of costumes, and more than a few missed lyrics, put this one down as one of the best concert tours I’ve ever seen. KISS Brings It.
At the end of the show, both KISS and Def Leppard accepted the ALS Ice Bucket Challenge, so watch the exclusive video from KissOnline.com, below: Happy Birthday, Gene Simmons!

Full photo gallery is at https://www.onstagemagazine.com/kiss-indianapolis-august-22-photo-gallery