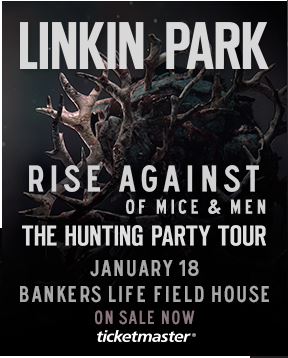 WITH SPECIAL GUESTS:
RISE AGAINST and OF MICE & MEN

TICKETS ARE ON SALE NOW !!

INDIANAPOLIS  (December 8, 2014) – LINKIN PARK will appear live in downtown Indianapolis on Sunday, January 18 at 7:00 p.m. as part of their highly anticipated The Hunting Party Tour, featuring very special guests, RISE AGAINST and OF MICE & MEN.

Tickets are on sale now at all Ticketmaster outlets, the Bankers Life Fieldhouse box office and online.  Check www.linkinpark.com and www.ticketmaster.com for further information.

For tour updates and further info go to: www.linkinpark.com

LINKIN PARK is a Grammy-Award-winning, multi-platinum alternative rock band comprised of co-lead vocalist, Chester Bennington, drummer/percussionist, Rob Bourdon, guitarist Brad Delson, bassist Dave ‘Phoenix’ Farrell, DJ, programmer Joe Hahn and Mike Shinoda – co-lead vocals, keyboards, guitar. The band has sold over 50 million albums worldwide, and is the biggest band on Facebook – with over 65 million fans and counting. In the span of time since 2000, when Linkin Park debuted on the Billboard 200 – no other artist has had more top 10 singles on the Alternative chart, and no other band has achieved more  #1 albums this century. Their sixth studio album, The Hunting Party reached #1 in the iTunes store of 67 different countries. On their most recent touring cycle, the band played to over a million people, in 79 shows, on six continents.  In 2005, Linkin Park founded Music For Relief, a 501 © (3) non-profit organization dedicated to providing aid to victims of natural disasters and the prevention of such disasters. Since its inception, Music For Relief has raised over 6 million dollars for victims of multiple disasters across four continents. The organization was recognized by UN Secretary-General Ban Ki-Moon for the Download to Donate program to raise funds and awareness in the aftermath of the Haiti earthquake. In recognition of its humanitarian work, Linkin Park received a 2011 Global Leadership Award from the United Nations Foundation.

RISE AGAINST After 15 years and six incendiary albums, Rise Against has become one of the most successful, challenging and revered punk rock bands on the planet. Rise Against have sold four million albums globally across their last four releases – with 2011’s Endgame debuting at number one in Germany and Canada, and number two on the U.S. Billboard album chart. Their current album The Black Market was released in September 2014 via Interscope Records and debuted at #3 on the Billboard Top 200 chart.

OF MICE AND MEN Since the 2010 release of their self-titled debut, Orange County, CA-based quintet Of Mice & Men have blanketed rock radio airwaves, garnered critical acclaim, and amassed over 20 million YouTube views and close to 5 million social media followers on the strength of an electrifying sound and live show. The latter has seen them play to packed-house crowds on headlining tours around the world and key slots on top fests, including this year’s Reading & Leeds Festival, where they were part of a star-studded lineup that included artists such as Queens of the Stone Age, Arctic Monkeys, Macklemore & Ryan Lewis and many more. They’re touring in support of their latest album, Restoring Force, which hit No. 4 on the Billboard Top 200 Album Chart and No. 1 on both the Billboard Top Independent and Top Rock Albums Charts. The band recently teamed with USA Today for the premiere of their new video, “Feels Like Forever.”