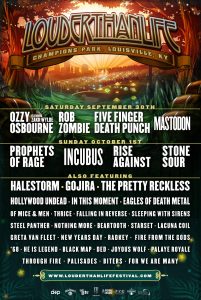 Louisville’s Louder Than Life features a selection of award-winning bourbons, whiskey, spirits, craft beer, the best food Louisville has to offer, along with a powerful music lineup of rock legends and breaking talent performing on three stages. The festival celebrates the bourbon culture and culinary heritage of this unique American city.

On the stellar lineup at Louder Than Life this year: Five Finger Death Punch. One of the most successful bands in heavy music despite receiving little love from critics. They were founded in Las Vegas during 2005 by former U.P.O. bassist Zoltan Bathory and ex W.A.S.P. drummer Jeremy Spencer.

Bathory explained to Dabelly magazine that he derived the band’s name from the ultimate death blow in the Quentin Tarantino movie, Kill Bill 2.

“Zoltan was watching Kill Bill , you know he’s from Hungary, right? His sense of humor is a little bit different, so to him I guess it was the funniest thing in the world, this five finger lotus punch or whatever it was. And I guess it started out as a joke thing, he said, ‘This would be a great band name’ and yada, yada, yada.”

“When they came to me they were actually thinking about changing it and I told them, ‘Dude, that is the most killer heavy metal band name ever. That’s like Slayer, that’s Metallica, Five Finger Death Punch, it sits well with me.’ I pushed it around in my own head to make it work a little bit more metaphorically.”

As you’d expect, their set at Louder Than Life in Louisville, KY last weekend was packed with, attitude, aggression and plenty of posturing from Moody. Check out our gallery below.

All Photos by Glenn Hirsch